For the macro, see MACRO time. 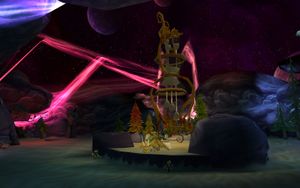 The Sand Clock within the Caverns of Time.

“The only reason for time is so that everything doesn't happen at once.”

[Reins of the Time-Lost Proto-Drake]

Time is a progression of instants.[1] This movement is ordinarily perceived by mortals as regular and determinant, functioning much like a clockwork;[1] yet perception does not dictate reality:[2] time is chaotic, always in flux, and completely malleable,[2] flowing like the sands of an hourglass.[1] Without the truth of time as it is meant to unfold, the fabric of reality will unravel.[3]

Time can sometimes move differently according to location. Alternate Draenor saw decades pass after the portal with Azeroth was closed while mere years happened elsewhere. Passage of time is also chaotic in the Shadowlands.[4]

In all known realms of the cosmos, time flows forward, ever forward. Chaotic energies in places like the Twisting Nether can affect how quickly it flows, but it only flows forward.

Once an event happens, it cannot be changed. These events and choices, made up of all creatures and forces in the cosmos, join together like a river, sharing the same reality. Different choices and different possibilities naturally spin off the river of time like small creeks and estuaries, ebbing and flowing for a while. If these shades of what could have been are left alone, they will eventually dissipate into nothing. If efforts are made to preserve them (or alter them), they can indeed remain in existence indefinitely. They can even be made to feed back into the main river—dead creatures can seemingly "live again," and the past (or future) may literally come back to haunt you. This is not a natural phenomenon, and the inhabitants of the main timeway will often find these experiences to be quite alarming.

But the only timeway that has a permanent effect on the cosmos is the main timeway. Creatures like the bronze dragons, who have command of temporal magic, can see all the countless tributaries of alternate universes and timelines, and they can even move back and forth along the stream to observe the past and the future.

If that main river is disrupted, it could spell doom and disaster. All life on Azeroth depends on time to flow ever forward. Without the surety that the sun will rise and set each day, the seasons would not pass, the cycle of life would become meaningless, and all living creatures would eventually die from being unable to sustain themselves. It is the most sacred mission of the bronze dragonflight to keep that from happening.[5]

Due to its damages, in Outland the passage of time feels different to members of the bronze dragonflight.[6]

Temporal magic manifests as a bronze[8][9] or golden light.[9]

Rarely, the essence of time can become crystallized to form an

[Epoch Stone]: golden mineral matter that radiates the weight of ages. To form, this mineral requires rapid passage through the eras. Its presence indicates that the place or the being in which the stone is found may not exist in one time at all, but shift rapidly from timeway to timeway.[10]

Chronomancy is the art of weaving time.[11] Time magic is a young field of research.[12] This discipline falls under the school of Transmutation, allowing the deceleration of events (through

[Slow]),[13] the acceleration of events (through

[Time Warp]), or the opening of temporal portals and the repairing of damaged timeways, among other possibilities.[11]

Modifying divination magic with temporal magic can allow one to see across time.[14]

Empowered by Aman'Thul's cosmic powers, the dragon Nozdormu and his flight were enabled to guard time itself and police the ever-spinning pathways of fate and destiny. All who sought to disrupt the timestream flow faced the Great Aspect and his brood's[15] Keepers of Time.[16]

Intrusive time-shifting of the Infinite dragonflight creates tears in time itself, twisting it infinitely into crystallized essences.[17]

Shortly after the Third War, Krasus believed that Nozdormu held time together against an anomaly.

Members of the bronze dragonflight can help adventurers time travel to older versions of some zones.

Time is meaningless inside the Dream. As a result, the green dragonflight, which spends the majority of its time in the Dream, is extremely long-lived. Ysera's consorts in particular almost never emerge from the Dream and are effectively immortal, as are all other permanent denizens in the Dream.[18]

Fel energy and the Twisting Nether

When the orcs entered the Nether they journeyed through time and space from another world and into Azeroth. A spell that would cast one into the past was hardly that much different.[19]

Time passes differently deep inside the Twisting Nether, and it is impossible to tell whether days, years, or centuries have passed.[20] Turalyon and Alleria have fought in the Nether for a thousand years from their perspective, while on Azeroth it has been only a few decades.[21][22]

Aided by the Spirit of Air, a shaman may be able to see faraway objects or events, whether the distance be physical or temporal.[24]

After the Aspects' lost of power following the fall of Deathwing, the bronze dragons required mortal help to police the timeways.[25] Vowing to protect them at any cost,[26] the Keepers of Time reformed themselves as the Timewalkers, a new faction comprised of both dragons and mortals.[25]

The Vision of Time was an hourglass created by Kairozdormu with the Epoch Stones from the Timeless Isle and Sands of Time from the Hourglass of Time.[27] During Garrosh's trial in Pandaria, Kairoz smashed the hourglass to bring Garrosh to Year -4 of an alternate universe Draenor. The Vision of Time and its shards can also be used to see through time by those without any particular knowledge of chronomancy.[28]

Elisande was a master in time magic. She put an army into a time lock[29] which contained chaotids and pulsaurons that hid between threads of time.

Some nightborne rewind time to heal.[30]

The naaru technology of the Exodar can warp time.[31]

Tailors can mend Time Rifts with

[Synchronous Thread]. Timeweaver Delormi is among a group known as the Synchronous Tailors.