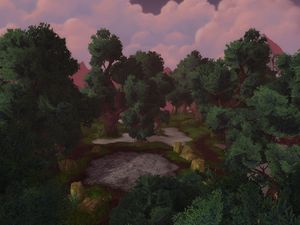 The Time-Lost Glade is a forested wetland high in the mountains of Nagrand. It is where Garrosh Hellscream betrayed and killed Kairoz and took his fragment of the

[Vision of Time]. Kairoz's death left the immediate area temporally unstable, allowing several Time-Lost creatures - including the ogres that populate the area in Outland - to come into the glade. During

[100] Tarnished Bronze, Chromie leads Khadgar and the commander to the glade to put Kairoz's spirit to rest.