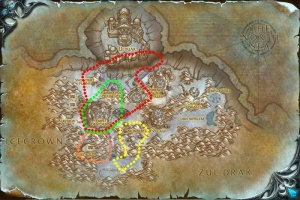 Time-Lost Proto-Drake is an extremely rare monster which occasionally appears among the mountains of the Storm Peaks. It is especially sought after because it has a 100% chance of dropping

[Reins of the Time-Lost Proto-Drake] when killed. Because of its rarity, many players may hunt it for weeks before they even see it at all, much less kill it themselves.

The drake is out of reach of ground attacks for most of its flights, and must usually be pulled while on a flying mount or in flight form.

Each spawn spot can spawn either Time-Lost Proto-Drake or Vyragosa. The routes can differ slightly from time to time, but remain relatively the same. Most add-ons only show the most common path taken. 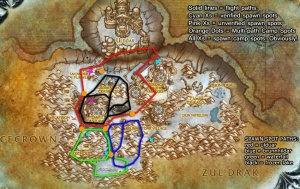 The only spawn time-related information one can count on is that after Vyragosa or Time-Lost Proto-Drake are killed, neither will spawn for 6 hours. Spawns can be anywhere from 6-22+ hours after a kill. This all depends on how fast rares are being killed across Northrend. There has been extensive studying and experimenting done on this. Every time a team was camping all four spawn spots with a secondary team scouring Northrend killing every rare they could find, the times shifted more towards every 6–11 hours as opposed to the more normal 12–20 hours.

There is no discernible pattern involving how many minutes before or after the hour or what hour of the day it will "usually" spawn from. None of the spawn spots are more active than any of the others. It is all random.

The drake was the first rare spawn of a rare spawn before the introduction of Aeonaxx.

Time-Lost Proto-Drake is not a challenging fight and should be easily soloable by all classes. However, having some

[Snowfall Lager] on hand is highly recommended. Since it often flies out of reach of most attacks, this will allow one to attack it in the air to initiate combat, and then use the Lager to avoid falling to one's death after dismounting.

The absolute best way to farm Time-Lost Proto-Drake is to pick a direct spawn spot and camp it. While it is currently still popular to pick a route-central, multi-path crossing, this is not the most logical place to sit at. When sitting at one of these, you have no idea who is at, near or passing by any of the four spawn spots. Thus, for all you know, all four of the known spawn spots are camped and, usually, you cannot even see them from the popular multi-path camp spots. Yet, if you pick a spawn spot such as Frozen Lake's, that can see Ulduar Ravine and Waterfall's flight path, you are guaranteed a 1/4 chance of directly tagging a spawn, plus the chance of seeing one en-route. The further you are away from the spawn spot(s), the further down your chances drop.

Flying around is clearly the worst way in regards to actually scoring the kill. No matter how good your path may be, you do not know which of the four it can spawn from and you don't know which direction it went. It is entirely possible that even four people can be out flying around and just miss it by a few yards out of sight. As aforementioned, the further you are from a spawn spot, the more your chances fall. Conversely, the more you move around the more likely you are to miss it for any variety of reasons.

If you are truly interested in obtaining this very rare mount, be prepared to invest a lot of time camping the Storm Peaks. The creature's name is apt; anyone who puts in the time to hunt for it will surely have quite a bit of "time lost" for their efforts. Be patient.

See Rare mob for information on addons and other means of making rare mob locating easier.