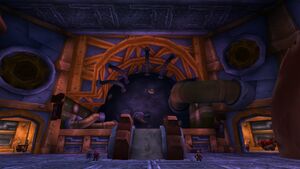 Tinker Town is the gnomish quarter of Ironforge. It is home to a number of alchemy and engineering trainers, as well as the entrance to the famed Deeprun Tram.

When the gnomes lost Gnomeregan to the troggs, the dwarves of Ironforge took in the refugees. The gnomes constructed Tinker Town[1] in the district where the Ironforge Deeprun Tram station had been built. Some dwarves like Skuerto were booted out of the city to make way for them,[2] implying dwarves originally lived in this ward. Prior to the partial retake of Gnomeregan, Tinker Town was the center of the gnomish court in exile and High Tinker Mekkatorque could be found here, along with his closest advisers.

In the Lands of Mystery RPG book, Tinker Town is known as the Industrial Ward.[3]