Tiragarde Keep is an Alliance stronghold in Durotar. It was previously manned by soldiers loyal to Admiral Daelin Proudmoore, Lord of Kul Tiras, and was ruined in battle against the Horde. After Daelin's death a reserve force under Lieutenant Benedict took control of the ruins and continued the Admiral's crusade against the orcs. Almost all of his forces were killed in the Cataclysm, and were soon replaced by Theramore soldiers from Northwatch, aiming to maintain this stubborn Alliance foothold in Durotar.[1] 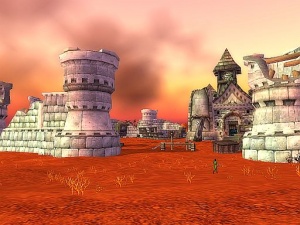 Despite the Third War peace agreement between Thrall, Warchief of the Horde and Lady Jaina Proudmoore, the founder of the Alliance city of Theramore Isle, both orcs and humans retained deep suspicions of the other, many holding fast to old hatreds. Jania's father Grand Admiral Daelin Proudmoore led his fleet from Kul Tiras to the shores of Durotar, and proceeded to wage renewed war against the orcs. The Admiral hastily constructed Tiragarde Keep as part of his offensive.

Though Admiral Proudmoore was ultimately slain in the Horde's assault led by Rexxar on Theramore, a set of special orders written by the Admiral before his departure from Kul Tiras later come to light. With no word from Proudmoore's fleet since their arrival on Kalimdor, Lieutenant Benedict was dispatched to retake the keep and continue the fight against the orcs. It was also said that Lieutenant Alverold, sent on a mission of exploration, was destined to return to assist in this task.[2]

The damaged keep still stands, a gleaming white structure distinctly out of place among the crimson rocks of Durotar. Prior to the Shattering, Benedict maintained controlled of this small but strategic foothold despite the efforts of Razor Hill, and the Kul Tiras Marines and Sailors patrolling the crumbling ramparts were well-trained and filled with contempt for the Horde. Ever a thorn in the Horde's side, young warriors of the Horde were repeatedly sent to harass and cut their teeth against the entrenched humans, but were never able to rout them from Durotar.[3]

The shore was wiped out by the Cataclysm, along with much of Tiragarde Keep and many of the marines and sailors. The area is currently littered with the corpses of Benedict's Kul Tiras forces, although one soldier survives atop a crow's-nest of a beached ship. Tiragarde keep is now commanded by Lieutenant Palliter and filled with soliders from Northwatch Hold. Gar'thok of Razor Hill now sends young orc and troll warriors to combat the new threat posed by the Northwatch Expeditionary Force. Additionally, Gail Nozzywig requests that adventurers bring her the abandoned treasure of the former Kul Tiras occupants.[4]

During the Blood War, Alliance forces were sent to salvage[5] and rebuild Tiragarde Keep. The Horde attacked the keep in order to scour the ruins from the land and Keep Watcher Kerry was encountered by the Horde troops,[6] while the Alliance encountered Tarshaw Jaggedscar.

Tiragarde Keep is the only Alliance outpost in Durotar. These soldiers loyal to Admiral Daelin Proudmoore, father of Jaina Proudmoore, man Tiragarde (much like Northwatch Hold in the Barrens). Since Daelin's death, they have continued their crusade against the Horde. While Jaina does not approve of their actions, the majority of the Alliance accepts the dangerous philosophy of these troops. Although there are some who view them as being almost as fanatical and stupid as the Scarlet Crusade. It might seem Thrall has not crushed this group out of mercy, and that may prove a strategic mistake.[7]