Tiragarde Sound is the largest and most central of the three major regions of Kul Tiras. Mountainous and rugged, the region is divided in two by a massive bay that opens into the Great Sea. Tiragarde Sound is host to the Kul Tiran capital city of Boralus and thus serves as the seat of power for the ruling House Proudmoore. Its citizens retain a strong maritime tradition and hail from a wide range of backgrounds, from monster hunters and pirates to noblemen and tidesages.

The region is the ancestral home of the Proudmoores.[1]

The people of Tiragarde Sound are renowned monster hunters, raging battle against the creatures of the sea, and struggle every day against pirates at their own shores.[2] While the pirates were once content to stay at Freehold, in recent months, they have grown bolder, and began attacking Tiragarde Sound.[3] The region has been marred by infighting and corruption. Gangs run rampant while the region's noble leaders squabble for power and influence.[1]

During the war between the Alliance and Horde, the area served as the Alliance's staging point and home base.[2]

The region of Tiragarde Sound serves as the heart of Kul Tiras. Nearly bisected by the capital city of Boralus, the land is rich with wildlife in the hills and mountains to the north and south, and its people enjoy the bounty of the oceans to the south, east, and west. It is a realm of people in touch with both the land and the sea. Inland, the mountains and forests provide prime hunting grounds. A vast coastline borders Tiragarde Sound to the south, west, and east, where those brave enough can fish, boat, swim, and hunt for treasure.[1]

Tiragarde Sound sits on an inlet in the middle of Kul Tiras. It connects the Great Sea from one side of the island to the other, and is a connection point for all the major regions of Kul Tiras.[3] 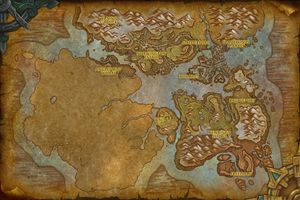