[Blade of the Empty Void],

[Knife of the Tarnished Soul] or

Tirion Fordring, at the Crusaders' Pinnacle, wants you to obtain and wear a

[Cultist Acolyte's Hood] and meet him at the entrance of the Cathedral of Darkness.

Just this morning, my scouts informed me of a Cult of the Damned procession leaving from Icecrown Citadel to the Cathedral of Darkness, bearing an artifact.

And now I learn that it might be Arthas's own heart... a thing containing the last bit of his remaining humanity.

This is a sign of the Light. As long as such an artifact exists, there is a chance that Arthas Menethil can become a man again!

Meet me at the cathedral's entrance. Be sure to bring a cultist's hood—we're going incognito.

I do not view what we just went through as a failure, <name>... quite the opposite.

By allowing me to peer into his heart, you allowed me to confirm what I needed to know. There is no Arthas Menethil anymore—there is only the Lich King.

This quest commonly bugs out, with Tirion and his adds frozen inside. This was a known issue as of January 2009.[1]

Cultist Acolytes are patrolling up and down the stairs of the Cathedral of Darkness, just to the northwest of Icecrown Citadel.[46, 76] 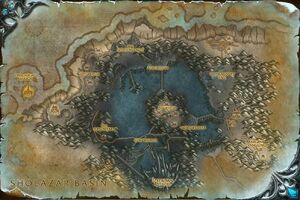 Tirion is up the stairs to the right, by the bonfire with the other disguised crusaders.

The Lich King ends up coming and seeing through the player's and Tirion's disguises. Tirion approaches him and deems his heart to be unredeemable and thusly strikes it down. Destroying the Lich King's heart causes the Lich King to drop to 30% of his health, and also causes Tirion to be knocked out. Darion, Koltira, Thassarian, and some other random death knights end up coming to save Tirion and the player from a rather large number of elite mobs. They will open an "Escape Portal" - Take it, or else the Lich King will instantly kill the player after he casts a 8 second spell called "Lich King's Fury".

To complete the quest, return to Tirion at the Crusaders' Pinnacle. He also explains his reasoning for destroying Arthas' heart. As the title sugests, he assumes that The Lich King didn't destroy Arthas' heart because it could affect him in a bad way and even without anything else to support his assumption, Tirion takes the risk and destroys the frozen organ.

Warning: DO NOT drop the Cultist Disguise buff while inside the Cathedral. An undisguised player will aggro the room and wind up dead fairly quickly. Let the death knights and crusaders do the killing. It's much more enjoyable to see Darion Mograine absolutely dismantle the cultists anyways.

There you are. Are you ready then? Once we start, there is no turning back.

According to the combat log, Lich King's Fury "instantly kills" anyone it hits, rather than actually doing damage. If you use

[Spell Reflection] on it, you will still get the message in your combat log, but will not actually die. However, the Lich King will immediately teleport away.