For the lore of the zone and its status after the Cataclysm, see Tirisfal Glades. 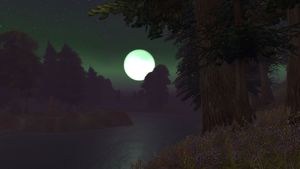 On the northern coast of Lordaeron lies the eerie Tirisfal Glades. The unofficial kingdom to the Forsaken,[1] servants of the Banshee Queen Sylvanas Windrunner, the wooded hills are seeped through with the curse of the Lich King's plague. The sky over Tirisfal is eternally gloomy and tinted a blighted green, and the trees and other flora desperately cling to their last shreds of life.

Although tainted and melancholy, Tirisfal still very much has its own unique, haunting beauty, particularly in such areas as the stony North Coast, the village of Brill, and the deep atmosphere of the ruined Agamand Mills.

Tirisfal Glades is home not only to the Forsaken, but to their enemies as well. The Scarlet Crusade has several outposts here, including the seat of their religious faith, the Scarlet Monastery. The minions of the Scourge are also ever present, tainting the derelict farmsteads and dilapidated mills with their foul presence.

The instanced, winged dungeon the Scarlet Monastery can be found in the Tirisfal Glades. There are no other dungeons or battlegrounds in the area.

The western end of Tirisfal contains a large inaccessible area. There is a path leading to the area accessed via small lake in the northwest by the coast, past the Solliden Farmstead. The path is currently blocked by large rocks. It is possible to venture into this area by some minimal climbing on the north end; however the mass is barren with few hill and cliff-like features. 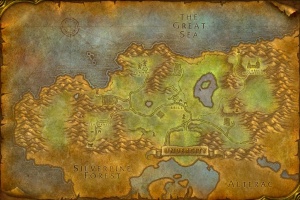 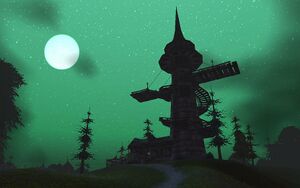 Original zeppelin tower between Brill and the Undercity.

Flight paths from the Undercity

Tirisfal Glades is home to several Forsaken of status. From the base camp in Deathknell, Executor Arren sends promising young Forsaken out into the world. In Brill, Executor Zygand leads the effort to reclaim Tirisfal from the Scarlet Crusade, and at the Bulwark, High Executor Derrington seeks to eradicate the foothold the Scourge has established in the Plaguelands. 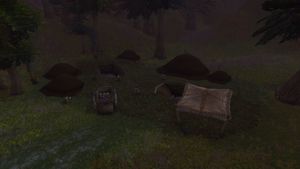 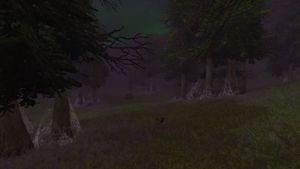