From Wowpedia
(Redirected from Titanic Purification)
Jump to: navigation, search

Corrupted items are gear that has been corrupted by N'Zoth. Corruption gives an item a unique bonus, while also increasing corruption. As a character's total corruption increases, they suffer increasingly detrimental effects. The first time an adventurer obtains such an item,

[120] Curious Corruption will start. As the corruption a character is under increases, their appearance will be affected accordingly. With corruption on 40, the character model will appear covered in a purple shimmering miasma. When above 80 corruption the miasma will turn red. 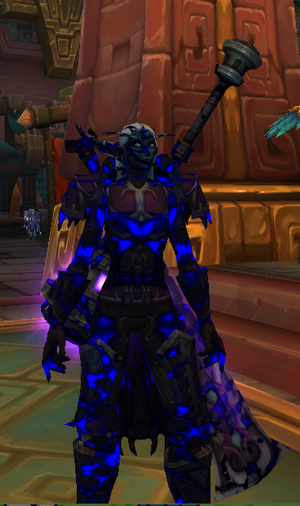 A character with a moderate corruption level.

Wearing corrupted items raises the level of base corruption, which can be offset by the resistance provided by equipping and upgrading 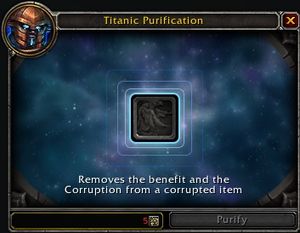 Corrupted items can be purified by MOTHER in the Chamber of Heart, removing both benefit and corruption.

Developers’ note: While Corruption’s damage taken and healing received debuffs are substantial at high Corruption amounts, players possessed of particular ingenuity have constructed strategies allowing them to deal nearly infinite damage during brief windows when they themselves are immune to damage. It’s important to us that players feel like they can play around with how much Corruption they can afford to wear, but we’re setting a hard limit at 200 Corruption – going beyond that, N’Zoth’s dark power will defeat you.