Titanstrike is the artifact used by beast mastery hunters in World of Warcraft: Legion. When it was created, it was Azeroth's first firearm.

This item is obtained through

A peerless example of techno-magical engineering, the Titanstrike was designed by Keeper Mimiron, a titanic watcher and brilliant inventor. Securely housed in the heart of the rifle, a relic known as the

[Thunderspark] powers the Titanstrike, harnessing the essence of storms and focusing it into concentrated blasts of energy. The rifle's power source can also be credited to Mimiron, who devised it for his comrade, Keeper Thorim, in ages past.[1] 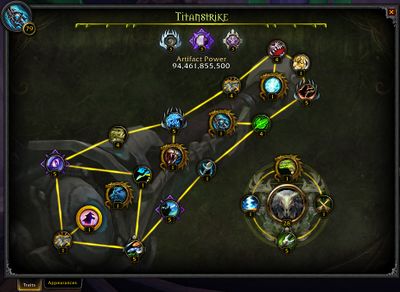