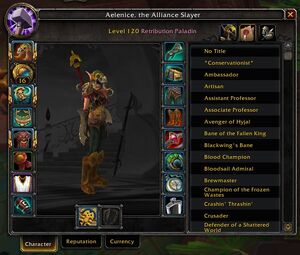 For mobs and NPCs, titles appear after the name (surrounded by <>s). They usually help identify either the faction or organization the creature belongs to or what kind of service they might provide.

The majority of titles available are in-game are obtained via completing achievements. Below are listed all known titles, in order of the category of the associated achievement, followed by non-achievement related titles. Feat of Strength-related titles are included in the appropriate achievement categories.

All arena titles are awarded shortly after the end of each arena season.

In Legion, each class gets their own unique title for completing their order hall campaign, as well as certain other titles.

The following arena titles are special class-specific titles, available only for the duration of the season they were earned.

Some of these PvE titles were for performing tasks of substantial difficulty, and with the release of additional content and more powerful gear these tasks have been somewhat trivialized, so the titles are no longer attainable. Other titles refer to events or mechanics that no longer exist.

These titles were obtainable from Challenge Modes, mostly for achieving realm-best times in dungeons during the matching expansion.

The following titles relate to specific Player vs Player events which have been removed from the game.

These quests required a raid group to be the first to complete the raid on their server, and are therefore essentially unavailable, unless Blizzard opens new realms.

Prior to patch 2.0.0, players could earn titles by participating in PvP; ranks would be assigned based on the number of contribution points acquired by killing opposite-faction players during a week. With the release of Patch 2.0.0 and the Burning Crusade, players can no longer obtain or improve their Honor System title, but can choose to display their highest lifetime title they've earned before the patch. All honor system titles are displayed in the format: title <name>.

Return of PvP titles in Cataclysm

Blizzard has indicated that in Cataclysm, players will again be able to earn titles by participating in PvP; the old ranks would be given based on a new battleground rating system.

In Cataclysm, we plan to make the old PvP titles available based on your performance in our upcoming rated Battleground system, similar to the current Arena titles which are based on your performance in the Arenas. Keep in mind, however, that Cataclysm is still relatively early in the development stages and this information is subject to change. We'll have more on the rated Battleground system and associated rewards in the months ahead.

[...] I'm going to clarify my original post, as I don't believe it's been decided yet whether they'll be purchased with Arena points or Honor points, or if a specific Battleground rating is the only requirement to unlock them. There are no plans to make these titles available for real-world money.

[...] We feel they're going to fit well with the new rated Battleground system. The titles were previously earned through a very cumbersome experience that didn't necessarily measure a player's PvP skill. With a new system for measuring performance in the Battlegrounds, we feel it's a good fit to award the honor title to those who excel. We do not intend for the top titles to be earned in a trivial manner. It's going to be quite hard to get High Warlord or Grand Marshal; and not because it's going to require that someone plays in the Battlegrounds more than everyone else on their realm each week, but because it's going to require a very impressive win/loss ratio.

The current plan is still for rated Battlegrounds to grant Arena points, though some rewards will require a certain rating from this system just as with the current Arena system.