Gul'dan is in the cave further into the Gloomspire.

We know that he's about to leave for Talador and Shadowmoon Valley. You must capture him by any means necessary, <name>.

I'll see you back at Throm'var. Good luck. 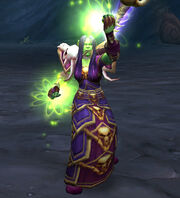 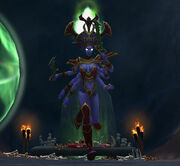 Image of Archmage Khadgar says: Be careful, my friend. Gul'dan is not to be underestimated no matter how prepared you might be.

Run in the cave and foolishly wind up an attack on Gul'dan.

Back at the mouth of the cave, the Image of Archmage Khadgar is still there:

Image of Archmage Khadgar says: Unfortunate, but now we know more. You can take the portal back to Throm'var.

It's much faster than running back...

Unfortunate, but not surprising. At least we were able to defeat one of the inner council members.

All is not lost, <name>. We know what the Shadow Council is up to and where they're heading.

We'll regroup in Talador. Together, we'll put an end to Teron'gor and his plans for Auchindoun.

Did you hear that?

On complete, a cutscene, the player is sapped.

[On the Shadow's Trail], the level 94 chapter of the Frostfire Ridge storyline.