To Kill With Purpose

Travel to Corin's Crossing to the south and slaughter the Scourge that inhabit the town. Collect 7 pieces of

[Living Rot]. Use the Mortar and Pestle to grind the Living Rot into Coagulated Rot.

Greetings, stranger! You've entered the heart of the Plaguelands. I hope you brought your undead-killing gear with you.

The plague spreads more slowly these days, so the Cult of the Damned has stepped up production in order to keep the land brown and dead, as they like it. I've got a plan to stop them. Take my mortar and pestle, and use it on living rot from the undead creatures in Corin's Crossing to the southeast. We're going to make a little present for the cultists!

How are things looking in Corin's Crossing? 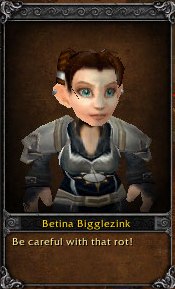 Hello! It's me. Hope you don't mind a little home-brewed magic to allow me to communicate with you in the field. It'll save us both some time.

We're going to incorporate that living rot into a mixture that'll ruin their next batch of plague. That'll show them!

There is a 10 minute time limit on Living Rot. You have to collect 7 Living Rot from the undead and grind them into Coagulated Rot using the mortar and pestle within this time or the entire item stack will disappear from your inventory.