Tol Barad quests take place in two sets of quest hubs, one on the northern Tol Barad Peninsula that always available, regardless of which faction controls Baradin Hold, and another on the southern, main Tol Barad island at Baradin Keep, which is available to the faction that controls it: 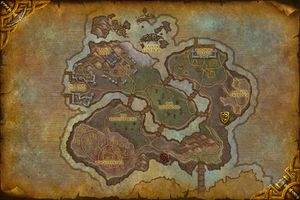 On Tol Barad Peninsula, four NPCs offer a total of six quests from the 22 possible each day: 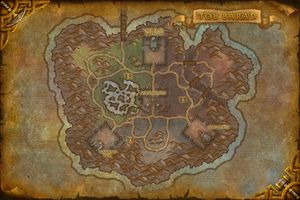 . These quests are available to the winning side as soon as the battle is over, but 15 minutes before the next battle begins, the quest-giver NPCs and all quest mobs will disappear, and whichever of the three quest areas had been unlocked will be closed again, preventing completion of any further objectives. There will be a five-minute warning to players in the zone before this occurs. However, any completed quests may still be turned in at the faction base camps on Tol Barad Peninsula at any time.

These three quests are always available:

Then, one of these three sets are available at a time, based on which quest area is unlocked for this possession of the island:

These sets are not exclusive with each other on a given day, and because the unlocked area rotates after every battle, it is possible for an attentive player to complete all 12 quests in a day by returning after each battle - assuming their faction continues winning, and the random sequence of areas unlocked works out in their favor.