This article is about the 5-man dungeon. For the non-instanced zone, see Tol Dagor. For the achievement, see 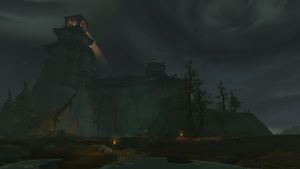 Tol Dagor is a dungeon in Battle for Azeroth. It is a prison located in an island east of Tiragarde Sound. Tol Dagor used to be a real prison, but some time ago the Ashvane Trading Company bought it. Now it is Priscilla Ashvane's own personal fortress with scumbags on both sides of the bars.[1]

Once a highly maintained prison, Tol Dagor has since been purchased and run by the Ashvane Company. Now, it serves as indefinite holding for any who would oppose the Ashvane Trading Company.

Taelia, the Proudmoore Elites, and adventurers arrive upon the shores of Tol Dagor via boat. They make their way to the first boss at the entrance of the sewers, and defeat the krolusk.

Taelia says: Oof! You had to crawl through this stuff to escape? Try to stay downwind from me!

Upon entering The Drain, a conversation between Ashvane and Korgus is heard.

Priscilla Ashvane yells: Korgus! Explain to me why you haven't flooded the lower levels and drowned these squabbling rats!?
Overseer Korgus says: My apologies, Lady Ashvane. I am confident my men will restore order soon.

Making their way further through the Sodden Depths, the conversation continues.

Priscilla Ashvane says: You'd better be right, or your replacement's first duty will be to watch you drown with the rest of this scum.
Irontide Thug yells: Intruders are coming through the sewers!

They arrive in the Detention Block, which Jes Howlis has taken control of, with Irontide Raiders brutalizing prisoners.

After Howlis' death, a jailer bars the way.

The jailer is killed.

Taelia says: Well done. Looks like you have things under control.
Taelia says: We'll finish securing the lower levels while you make your way to the Overseer.

A spotter gives the alarm, and the Ashvane Officer and his men bar the way.

The officer is killed.

Proudmoore Elite yells: We've secured the prisoners and established a perimeter. The lower levels belong to us.

Reaching the surface at the Overseer's Redoubt, the Ashvane are everywhere and try to stop the party's progression. They make a last stand right before Valyri's room.

The party reaches the Ashvane Armory where they defeat Valyri.

They then make their way to the Overseer's Summit, where they kill Korgus.

Main article: Overseer Korgus#Quotes
Taelia says: It seems Lady Ashvane will have an opening for a new overseer after all.
Taelia says: Now that we have the prison under our control and the keys in our possession, we can begin securing the Azerite and releasing the hostages.
Taelia says: You do good work... for an escaped fugitive.