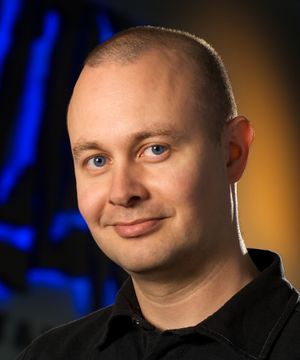 Tom Chilton (aliases Kalgan and Evocare[1]) is a game designer at Blizzard Entertainment and former game director for World of Warcraft.[2][3]

After working on World of Warcraft from its alpha in 2004 to the release of Legion, in late 2016 Chilton announced that he would be leaving the team to "[focus] on another project within the company".[3]

As a game director for Blizzard Entertainment, Inc., Tom Chilton is dedicated to ensuring that World of Warcraft is as enjoyable as possible for all of its players. This includes holding and carrying forward the vision for the game while overseeing the work of the design, art, and engineering teams.

In his spare time, Chilton enjoys playing games of all varieties. He has been an avid player of PC games for nearly 30 years and also enjoys card and board games.[2]

Chilton joined Blizzard Entertainment to work on World of Warcraft as a Senior Game Designer in early 2004, around 10 months before the release of the game,[5] where he was on a team of six game designers.[6] With Rob Pardo and Jeffrey Kaplan, he was one of three lead designers on World of Warcraft: The Burning Crusade,[7] the fastest selling PC game of all time. [8][2] Chilton was the sole Lead Designer for Wrath of the Lich King.[9] He was the Game Director for World of Warcraft from the Cataclysm expansion[10][11][12] until mid-October 2016.