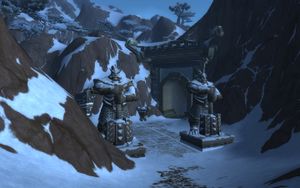 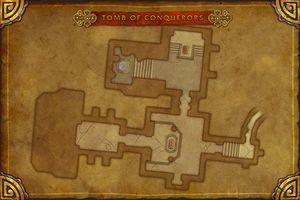 The Tomb of Conquerors was the final resting place of the Thunder King, Lei Shen, the first Emperor of the mogu empire. It is the largest tomb in the Valley of Emperors in Kun-Lai Summit, west of the Temple of the White Tiger.

Near the end of the Zandalari Troll Wars, realizing that they had no way to win by conventional means against the pandaren cloud serpent riders, the Zandalari trolls, led by Mengazi, intended to resurrect the Thunder King to turn the tide of the war. A great battle erupted near the tomb, only ending when Jiang, leader of the serpent riders, sacrificed herself to kill Mengazi and send the trolls fleeing back to their homeland in shame.[1]

Thousands of years later, following the destruction of their homeland in the Shattering, the trolls of the Zandalar tribe descended on the tomb once again to claim the remains of the Thunder King, in order to bring him back to life and restore the greatness of his ancient empire. Lorewalker Cho tasked adventurers from beyond the mists to reach the Thunder King's remains before the Zandalari did, but despite their combined efforts, the Thunder King was successfully resurrected by Prophet Khar'zul.