Tomb of the Sun King 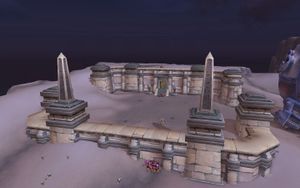 Tomb of the Sun King

The Tomb of the Sun King is the tomb of Sun King Nahkotep, leader of the Amathet tol'vir, in southeastern Uldum.[79, 63]

A group of cursed gnomes are trying to gain access to the tomb using an extreme amount of large explosives.

The M.A.C. Diver is parked right beside the tomb.

The Tomb of the Sun King has been occupied by the Amathet and Sun King Nahkotep, a group of tol'vir who believe only they can protect the titans' works.

The tomb's name presumably refers to Sun King Nahkotep, as he is found here, and it is near Sunstone Terrace which was the Amathet's territory before they went to slumber in underground tombs.[1]