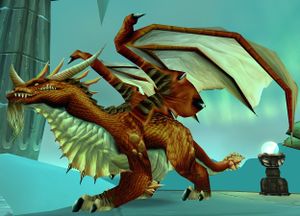 Torastrasza is a member of the red dragonflight located in Wyrmrest Temple. She is the Majordomo to the Ruling Council of the Wyrmrest Accord, and Alexstrasza's right hand/foreclaw in military matters.[1]

When the Twilight Dragonflight attacked Wyrmrest Temple from above, the Aspects' sanctums mysteriously exploded. Torastrasza discovered that the explosion was Korialstrasz's doing and that the air attack was just a distraction.

Torastrasza later bore Thrall into the battle to take the temple back from the occupying Twilight's Hammer forces.