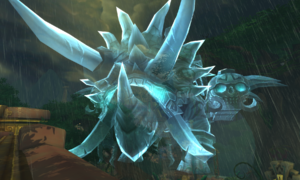 Torcali is a direhorn loa revered by the Zandalari trolls. She is a loa of the harvest.[3] Her worshipers are known as Torcalin, at the Terrace of Torcali.

Torcali is the grass, and the bounties that heap the Zandalari's tables. She is the great shaper: Where she walks valleys form, and where she drags her horns rivers form. She does not have a temple because Zandalar itself is her place of worship.[4]

Where the road ends, Torcali's realm begins. Her domain stretches far beyond Zandalar. She is the greatmother of direhorns.[5]

<Torcali stares down at you. Her voice enters your mind.>

If ya dismiss Torcali,
It be at your folly.


She teaches us de harvest,
She protects us in our home.
We become the smartest,
Our fields are rich with loam.
Brave and true and silent waiting,
Far afield, be fascinating.


Embrace Torcali, if ya be wise.
And finally rest dem weary eyes.[3]