Torghast, Tower of the Damned

This article is about the Shadowlands feature. For the Scourge structure in the Ghostlands, see Tower of the Damned. For the quest of the same name, see

Torghast, Tower of the Damned is an infinite dungeon in World of Warcraft: Shadowlands that can be played by 1 to up to 5 players. It sits at the center of the Maw.

Torghast is an endlessly replayable, ever-changing dungeon that can be challenged alone or in a group. Each run will differ, and adventurers will need to explore cautiously, as death comes at a terrible cost. Advance through Torghast's unpredictable challenges to unlock anima powers to enhance damage output or survivability. The goal is Soul Ash, used to craft the legendary weapons and armor that will help restore balance to the Shadowlands.[1]

Torghast: the dark one's seat of power is a place devoid of hope or redemption. Each floor that rises into the endless abyss is more vile and cruel than the last. To climb that tower is to ascend deeper into despair.[2]

Once, the Jailer kept only the most dangerous souls in the cosmos confined in this eternal prison. Now, some of Azeroth's greatest heroes are trapped here, and you'll need to rescue them from the Jailer's tower before he expends their very souls.[1]

Torghast is unlocked through a quest chain, started by Bolvar Fordragon in Oribos. Max-level players must first pledge themselves to one of the Covenants and complete the first chapter of their covenant campaign, at which point they will be offered

[60] The Highlord Calls, a breadcrumb back to Bolvar in Oribos.

The campaign covers freeing some of the characters that were left behind and unlocking the Runecarver. Quests are generally on a 20-hour time gate. If Bolvar does not immediately offer a follow-up quest, check back with him 20 hours later.

A normal Torghast run is comprised of six floors, with increasingly powerful enemies on higher floors.

Found or dropped anima cells unlock anima powers, which can drastically change how runs are played out, by unlocking some temporary abilities.

Souls can be freed, and will stack an untimed +1% primary stat (agility/intellect/stamina) buff for the duration of the run.

Friendly NPCs will offer optional side quests near the beginning of a floor, asking players to find another friendly NPC or an object near the end of a floor, or kill a specific enemy, and will award an anima cache on completion.

Treasure chests can occasionally be found, and will need to be opened with three keys found elsewhere in the floor, or via solving lever puzzles.

Map of Torghast's antechamber[3], entered by Portal to Torghast in Ve'nari's Refuge.

Torghast is divided into six primary wings, with eight layers of six floors per layer. All wings play similarly, but each wing has it's own twist on a mechanic.

A normal Torghast run is of a single six-floor layer. Floors have the following pattern:

Each floor raises the difficulty incrementally by increasing enemy health, the mix of enemies spawned, the size of spawn packs, and the damage enemies deal. Higher layers raise the difficulty even further.

Players must complete a run on any given layer to unlock the next. The layer-unlocking carries over between the six primary wings. For instance, once players complete layer five in Skoldus Halls, they will be able to attempt layer six in Skoldus or any of the other wings, like Coldheart Interstitia. However, the layer-unlocking does not apply to the Twisting Corridors, which keeps track of it's own layer unlocks.

As an example of the difficulty scaling, for a solo player, a Mawsworn Sentry has the following health values:

Soul remnants are a common sight in Torghast - Once freed, they will give the last of their strength in the form of the buff Soul Remnant's Blessing, which increases agility/intellect/strength by 1% per soul saved in Torghast. The Soulforges wing has a special variant that instead can provide a stacking 10% crit damage/healing and 10% haste buff, but it only lasts for three minutes.

Outside of very few exceptions, players are prevented from adjusting their equipment, talents, or specializations while on a run. The exceptions include at the entrance of the first floor, and near the broker on the third floor, who provides Refuge of the Damned:

Refuge of the Damned — You may change your Equipment, Talents and Specialization while in this area. Enemies have a harder time detecting you. Suppresses the effects of Torment of the Tower and The Jailer's Chains.

[Phantasma] is the Torghast-specific currency. Most mobs and ashen phylacteries will drop some Phantasma, which can then be traded in to brokers Ve'ken and Ve'nott on floors three and six for a selection of anima powers. Phantasma cannot be carried over between runs, and will be lost should players exit Torghast prematurely or end their runs normally after defeating the layer boss.

Brokers offer a selection of anima powers, and some special items, not all of which are available on each broker, including: 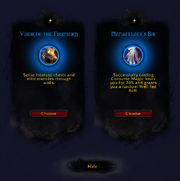 A choice of powers

Anima powers are gained by interacting with anima caches that can be found scattered about, either just spawned out in the open, dropped by mobs, rewarded from completing bonus objectives, or found in treasure chests or selected ashen phylacteries. Each selected power will modify the rest of the run. Many powers can be stacked, increasing the effect of the power.

There are hundreds of unique anima powers. Common powers are available to all players (straight stat or health increases like

[Curious Miasma]), while others are class- or spec- based (like

[Blink] through a Mawrat to kill it instantly and gain bonus Blink charges), and there are covenant-based powers as well (like

[Strigidium]: your summoned steward can heal or buff you in combat).

[Everwarm Socks] to move while under an

[Ice Block], then they can later choose

[Creeping Freeze], which freezes enemies that are near the mage while it moves when Ice Blocked.

Players (or the party) are allotted a set amount of deaths per run, starting with five for solo players and scaling up to 15 for a party of five. These deaths are spread across the party, and not that each player has fifteen deaths each. Once the death counter reaches zero, the very next death will trigger a 30-second timer. Once that timer expires, The Tarragrue spawns at the beginning of the floor and slowly walks all the way to the exit.

Once per week, layer bosses will drop

[Soul Ash], with the amount increasing based on the layer cleared. Soul ash is used by the Runecarver to make legendary equipment, with a base (item level 190) item costing 1250 Soul Ash. Only the six normal wing bosses will drop Soul Ash - bosses in the Twisting Corridors or any quest-specific wings will not have any Ash to loot.

In an effort to not force players to run every layer in a wing, they can skip back to that layer in future runs. The end boss will drop all soul ash from lower layers. Thus, if players skip to layer four for their first run of a week, they will loot 405 Soul Ash from the wing boss, as seen in the table to the left. Afterwards, should the player clear layer 5 of the same wing, they will come up with 60 more Soul Ash.

By virtue of two wings being available each week, should players manage to full-clear both wings they will gain 1200 Soul Ash each week.

Starting in layer three, torments will be added to the mix. The effect increases on every floor (with the exception of the break room on floor three). So, if an enemy has +5% health on floor 1, it will have +25% health on floor six. Torments include:

Ve'nari, at her refuge in the Maw sells some permanent upgrades to a few mechanics in Torghast, as a form of meta-progression. They require

[Stygia] gathered from the Maw and higher reputation standings with her:

Initially, players must complete the tutorial wing, Arkoban Hall, then a selection of two wings are made available each week. Late in the primary quest line, players will unlock access to the Twisting Corridors, a special challenge mode wing, which is always accessible from then on.

Skoldus Hall is the baseline version of Torghast.

A cauldron room in the Fracture Chambers

Full of necromancy and with a green theme, skeletal mobs in the Fracture Chambers, like Lumbering Creations or Skeletal Remains, explode when they die for a decent chunk of damage. Large packs of Skeletal Remains are notorious for this -- make sure to not kill them all point-blank, or the feedback may kill the player in return... Unlike exploding Mawrats, this damage only affects players so this cannot be used to clear out packs of enemies.

In the lava and fire-filled Soulforges, the Partially-Infused Soul Remnants found here have been partially bound into armor. Players can choose to finish the binding ritual, gaining a stacking +10% crit damage/healing and +10% haste buff for three minutes, or they can be freed as normal for the usual untimed 1% agility/intellect/strength buff.

Think teal and snow. Coldheart Interstitia is full of mawsworn kyrian. Watch out for the ambushing kyrian!

In Mort'regar, the corpses of most mobs slowly spread Death Pools that do not despawn. Take care to avoid killing them in inconvenient spots. Additionally, Deadsoul Spirits cannot be fully killed, and will respawn after 30 seconds with 40% health.

The Upper Reaches is the most prison-like wing of the tower. Fewer anima cells, ashen phylacteries, and freeable soul remnants are around, limiting the power gains as well. Many enemies from previous wings make an appearance.

For players seeking cosmetic rewards, the Twisting Corridors will stitch together three wings of floors for a total of 18 floors (six per wing), with the usual break rooms on the third floor and a boss on the sixth. No

[Soul Ash] will be found here. In a small concession to run time, floors are generally much smaller than in normal wing runs; usually a small or medium-sized room per floor.

Players are directed to Torghast several times in the Shadowlands campaign. The first time is late in the Revendreth storyline when Prince Renathal, freed from a cage in the Maw sneaks himself, the Maw Walker, and his enchanted sword into Torghast during

[57] Torghast, Tower of the Damned to free some more allies.

Later, after players have joined their covenant, the second chapter of their covenant campaign will send them to Torghast multiple times to be introduced to the wings and to free some Azerothian champions. Additionally, they will unlock access to the Runecarver, who will create and upgrade legendary items over the course of the expansion.

Some notable characters have been captured, and part of the storyline is freeing them, including:

Captured souls offer a bonus objective, and after completing it, can become the Maw Walker's follower in their covenant sanctum for Adventures: