Torok Bloodtotem is the chieftain of the Bloodtotem tribe, one of the four tribes of the Highmountain tauren. High Chieftain Mayla says that he is "volatile, but useful"[2] while Oakin Ironbull describes him as easily displeased and hateful of outsiders.[3] During the course of the Highmountain storyline, Torok and his tribe reveal that they have allied themselves with the Burning Legion and transform into the "Feltotem".

Torok has a son named Mellok, who, like his father, eventually becomes a Feltotem. 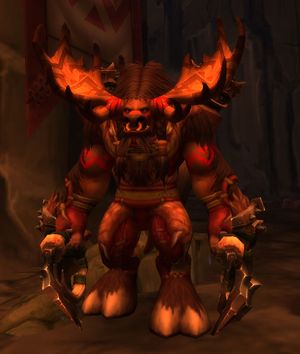 Torok before his corruption

When the Burning Legion returned to Azeroth, Spiritwalker Ebonhorn called a meeting between the leaders of the tauren tribes — Ulan Highmountain, Jale Rivermane, Lasan Skyhorn and Torok Bloodtotem — as well as the Underking of the drogbar, Dargrul. As Ebonhorn began describing a vision that the spirits had given him, Dargrul interrupted him by asking if the tauren were planning on actually using their ancient artifact, the

[Hammer of Khaz'goroth]. This caused Jale to ask if there was no end to the drogbar's rudeness, with Torok saying that there better be "or there will be".

Like Jale, Lasan and Dargrul, Torok was shocked at Ebonhorn's revelation that according to the spirits, the power of the hammer would be wielded against the Legion by an outsider rather than a native of Highmountain. Torok simply stated that the spirits were wrong, and when Dargrul argued that the artifact's power belonged to Highmountain due to Huln Highmountain's usage of it after the War of the Ancients, Torok agreed with him. Nonetheless, the Bloodtotem chieftain reluctantly agreed to obey the spirits at High Chieftain Ulan's command. After Dargrul stole the hammer and used it to kill Ulan, Torok told Ulan's daughter, Mayla, that the Bloodtotem tribe could not spare anyone to hunt him down. As Torok's territory would take the brunt of the fighting, he was forced to depart from Thunder Totem along with Jale and Lasan.[4]

After Riverbend is destroyed by Dargrul, the adventurer is sent by High Chieftain Mayla to parley with the Bloodtotem tribe along with the Rivermane emissary Oakin Ironbull. After killing several of the nearby harpies encroaching on the Bloodtotem village of Cliff's Edge, Oakin and the adventurer are directed down to the Cave of the Blood Trial to meet with Torok and perform a traditional Bloodtotem rite of passage. Oakin remarks that it is strange for Torok to be in the cave at this time, but nonetheless complies with the request. After the adventurer performs the first part of the rite by placing the corpse of a harpy leader on an altar and besting a Bloodtotem warrior in combat, Torok sends the hero and the Rivermane emissary further down into the cavern. Upon arriving in the far end of the cave, however, a demonic portal opens and Marakhan emerges, killing Oakin while Torok laughs as his people become corrupted by fel energies and transform into the Feltotem tribe. Navarrogg, the leader of a non-hostile drogbar tribe who was being held in the cave to be executed, aids the hero in defeating Marakhan before transporting both himself and the champion to a hidden refuge nearby.

While the champion performs some tasks for Navarrogg in order to set back the Feltotem's efforts and help the drogbar regain his strength, Torok continuously mocks and threatens them. Finally, Navarrogg and the champion fight their way through Torok's Bluff until they succeed in killing the Feltotem chieftain himself. Navarrogg briefly returns to his home of Stonedark Grotto before traveling with his savior to Thunder Totem and declare his allegiance for the Highmountain Tribe in Torok's stead. 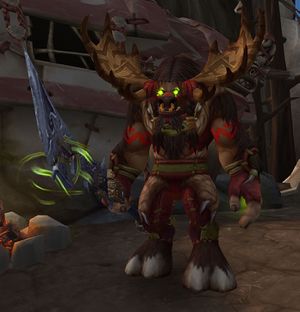