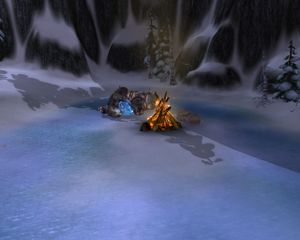 Torseg's Rest is a subzone located northwest of K3. The frost giant

Torseg the Exiled can be found here sitting next to a fire and a large pack. It is unknown why or from where Torseg was exiled. Interestingly, only Torseg the Exiled and the Champions of Hodir (both hostile) are labeled as giants, while all the rest of their kind are humanoid.

In beta, the human "Mei" could be found here. Mei (Not to be confused with Mei Francis) was a human female that was sitting next to the resting Torseg. Mei has been removed from the game, as she is not there now, and the only listing of her on a database is a bare entry on Wowhead here. It is unknown why a human female would sit with Torseg.