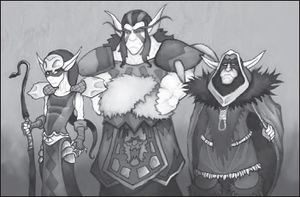 A totemic druid is a druid that bases his magic off a single totem. Before and during the Third War, almost all druids were night elves. (Most are still night elves, though many tauren and a few other races now take up the path.) Night elf druids were organized into different subgroups, each with its own totem animal — the most famous, and most influential in the Third War, were the Druids of the Claw and the Druids of the Talon. Since the war, night elves (and other druids) realized that diversity might be a better option. Now, druids no longer organize themselves by totem, but instead incorporate many different animals and animalistic aspects into their repertoire. Some call themselves Druids of the Wild to represent their breadth, but as this approach is now standard, mostly they’re called just druids.

Some druids, however, still follow totemic creatures. Some are old night elves who don’t see the point of expanding their views, while others are new recruits who wish to specialize.( These variants also represent druids from earlier ages, such as the Third War or the War of the Ancients.) The Druids of the Fang, now infamous for a catastrophe in the Wailing Caverns, is the largest druidic group that retains a totem, but the Druids of the Claw and the Druids of the Talon also exist.[1]

Primary Patron: Various (individual choice).
Shapeshift Form: Various (depends on chosen patron).
Savagekin are the most primal of druids, and bear an ancient but obscure legacy. Whereas some druids seek to command nature or bond with it, the savagekin surrender themselves to the natural world, abandoning much of their humanity to live with the beasts.

Primary patron: Ysera, Alexstrasza, Therazane the Stonemother
Shapeshift form: Multiple
It is strongly implied that playable druids are all Druids of the Wild. These druids employ a variety of magic from multiple totems, a new practice among the druids.

Primary patron: Malorne
Rumored druid order to have taken on totem based around Malorne.[2]