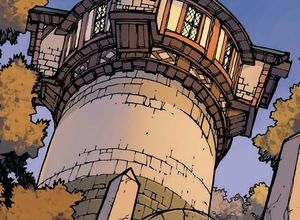 The Tower of Azora in Dark Riders.

The Tower of Azora is a small mage tower in central Elwynn Forest. The tower is run by a number of servants of Azora, who all appear to be gnomes, and who are in turn presided over by the Archmage of Azora, Theocritus. The denizens of the tower are in a constant feud with the inhabitants of the Tower of Ilgalar in Redridge Mountains, ruled over by the evil sorcerer Morganth. The two towers are constantly spying on one another through magical means.

Inside the tower are several vendors and, most notably, the Artisan enchanter for the Alliance.

An interview with the servants of Azora in the Gadgetzan Times reveals that many things straying too near the tower are adversely affected by its magical aura, so the servants often have to battle living buckets and mutant butterflies.[1]

Around the time of the Cataclysm, the tower was visited by Karlain.[2]

Upon the table on the top floor is a magical artifact named the Eye of Azora which allows anyone who touches it to see the surroundings of the Tower of Ilgalar. It is placed there during the quest

The Tower of Azora is located east of Goldshire and northwest of the Brackwell Pumpkin Patch. The coordinates are [63, 70] 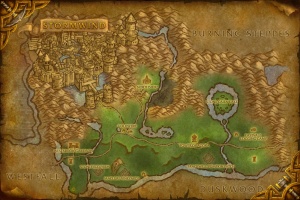 This small tower sits along the southern route in Elwynn Forest and houses mages who wish to escape the politics of Stormwind City. They are led by Theocritus, a human wizard who refuses to see visitors. His nemesis, Morganth, is planning something nefarious from Tower of Il'galar in Redridge Mountains.[3]

From looking at maps and comparing the map layout of the battlefield used in Warcraft: Orcs & Humans, some may speculate that Sunnyglade once rested around the Tower of Azora which would be the tower that is referenced in the mission that Sunnyglade is introduced. The river patterns are roughly the same, and there is a river dividing Elwynn Forest and Duskwood much like there is a river on the battlefield. The bridges may have been razed and the infrastructure removed completely. Also, the tileset may indicate that it did take place in a grassy field much like the former Brightwood (prior to its corruption) and Elwynn Forest.