This article is about lore. For the Garrison building, see Town Hall (garrison). For other uses, see Townhall. 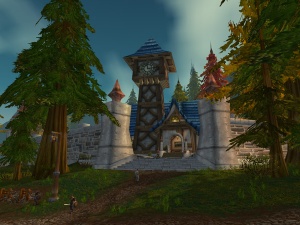 The town hall in Hillsbrad Fields.

Town halls (and city halls) serve as the primary centers for most human and Alliance towns. However, town halls have also been used by other races in the past and present, including high and blood elves, and the Forsaken. As the size of the town increases, the town hall can be upgraded into a keep or castle.

This is where the people of a settlement met to discuss the issues of the day. The King's servants, be they farmer, craftsman or peasant, would share their fears and hopes with the community in this building. It is also where the details of commerce were dealt with - the distribution of resources, and the spending of money. All shipments of gold and wood were routed through the town hall. The allocation of funds to build roads and walls were also addressed here. Additionally, it served as a center where peasants could receive training in harvesting and mining, as to better serve the kingdom. Being the center of the settlement's economy, there could only be one Town Hall. If it was destroyed, however, another could be built to take its place.[1]

This is where the denizens of an encampment came to meet and make their arguments heard. The constant bickering and backstabbing that occurred here were necessary, however, for it kept them from killing each other in the street. The town hall was also where the encampment's Overseer could keep a close eye on the resources and funds that were available, and use them as he saw fit. All shipments of wood and gold were brought here for his inspection. This is also where peons were given the training to do the simple tasks demanded of them by the orcish empire. Blackhand had ordered that only one town hall be allowed to stand in each encampment, so that separate factions of orcs would not arise. If the town hall was destroyed in battle, another could be built to replace it.[2]

The town hall served as a center for the community and commerce of the various towns and military outposts in Lordaeron. As the chief economic building in any settlement, these sites were equipped to process vital resources such as lumber and gold. The steady stream of peasants, who laboriously harvested and transported resources, made for a constant activity near the town hall. The training that peasants required to assist in the growth of their community was also given here. In time the town hall could be improved and upgraded into a keep.[3]

Beginning in Warcraft II: Tides of Darkness, orcish town halls became known as Great halls to distinguish them from their human counterpart.

The town hall is the nerve center of any human community and serves as the primary exchange for gold. It is also a center for training loyal peasants in their particular vocations, whether it be lumber harvesting, building construction, or gold mining. In time the town hall can be upgraded to stronger fortifications.[4]

The Town Hall helped the high elves to fend off Arthas and the Scourge as he tried to attack their capital city of Silvermoon and Quel'Thalas in Warcraft III: Reign of Chaos by serving as a returning point for gold and training units. However, the Town Hall couldn't be built by the High elf worker unit likely due to the limited ability of the map editor prior to the Warcraft III: The Frozen Throne expansion. With the addition of The Frozen Throne expansion's map editor, it is possible to make additional groups with building orders.

The town hall also helped the blood elves and Kael'thas during the Curse of the Blood Elves campaign in The Frozen Throne. This town hall produced unique blood elven-only units.

Human town halls can be found all throughout Azeroth, Outland and Draenor, and even in battlegrounds such as Arathi Basin. Many towns have them as well, the mayor or magistrate of that town usually being found inside it. The undead Forsaken (who themselves were once humans) have inherited most human buildings throughout former Lordaeron, which includes some of the town halls that are still standing. Some Mag'har orcs town halls are also still standing, and the Azerothian orcs are back at using a Town Hall in Frostwall, even though Serka refers to it as a Great hall.

Stormwind City has a City Hall, and Stratholme did have its own city hall housing Magistrate Barthilas. The town hall in Andorhal has also been referred to as a city hall.[5]