This article is about lore information. For the mastiff, see Tracker (mastiff). For the in-game tracking, see Tracking. 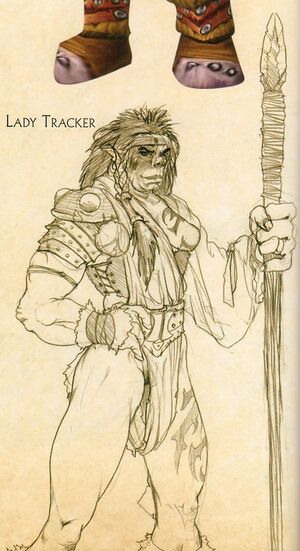 Trackers are hunters in service of various organizations. One can track beasts[1] or other enemies. The grummles are said to be expert trackers.[2] Troll headhunters are trained from birth to hunt, track and trap the most dangerous beasts in the wilds.[3] Orc wolfriders and orcs in general can also track.[4] The taunka employ special trackers known as snow trackers.[5][6] Ethereals who can track are called nether-stalkers.

After Garona Halforcen escaped from the Old Horde, Horde trackers were sent after her, but they were unsuccessful.[7] After Illidan Stormrage gathered the Fel Horde to Hellfire Citadel in Hellfire Peninsula, Illidari trackers scoured the routes to the Citadel and questioned fel orc clan leaders. They confirmed the presence of night elves as Illidan thought.[8] Known individuals who commanded trackers are Vindicator Kuros,[9] Marosh the Devious, Darius Crowley,[10] and Tobias Mistmantle.[11]

Scarlet crusaders use their subtle art of finding their undead quarry.[12] Known trackers are the tothrezim, epic scouts, epic elven rangers,[13] subversives, dungeoneer scouts,[14] and wilderness stalkers. Dark rangers are some of the best trackers in the world. According to orc shaman, spirit wolves prowl the spirit realms, always hunting and killing. Shaman summon spirit wolves to act as invisible trackers and stalkers, and deadly allies in battle.[15] Furbolg trackers are important members of furbolg society.[16]