For the hunter ability, see

[Tracking]. For the lore on trackers, see Tracker. 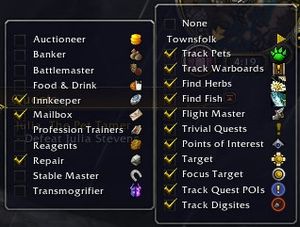 Tracking is a feature of the interface that enables players to track resource nodes, mobs, or NPCs on the mini-map. The magnifying glass control on the border of the mini-map allows the player to choose which types of tracking to enable. Some forms of tracking are restricted to certain classes and professions.

The ability to track the mobs in World of Warcraft is usually the sole bailiwick of the hunter, although other classes have limited tracking capabilities as well. At advancing levels, the hunter can learn to track Beasts, Humanoids, the Undead, Hidden foes, Elementals, Demons, Giants, and Dragonkin.

When a mob-tracking ability is activated, every creature that fits the classification selected shows up on the mini-map as a labeled dot, color-coded to its friendliness (green) or hostility (red). Tracking can be used in a variety of ways to enhance the hunter's situational awareness. For instance, in an area populated by both beast and humanoid mobs, the hunter can switch between beast and humanoid tracking, and stay aware of where ~95% of the mobs are in his general vicinity. Tracking is also useful if one has to beat a hasty retreat to a rearward fortification for safety's sake. Just keep monitoring the mini-map while switching frequently between tracking modes to find the most aggro free escape route. You can also see the name of the mob (or player/pet) if you mouseover the dot on the minimap, which for instance makes finding one specific mob in a group of mobs easier.