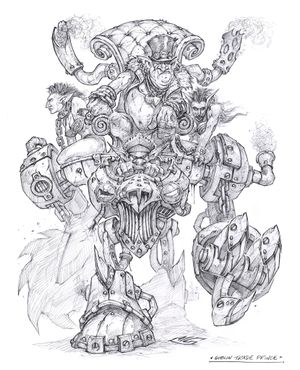 Cataclysm art for a trade prince.

Trade princes, also known as merchant princes,[1] are the main leaders of the goblin race.

The title of trade prince is not necessarily equivalent to the leader of a goblin cartel. The Venture Company has been called a cartel,[2] but its leader Razdunk is not a trade prince but its president.

After Deathwing reawakened the volcano on their home island, one of the goblins' trade princes realized that there was good money to be made in offering panicked goblins a ticket to safety on his ship, taking their life savings - and then selling them into slavery. A clever plan, until it (and the ship) fell apart in a naval crossfire between an Alliance fleet and a lone Horde ship. The shipwreck's survivors were washed ashore on the Lost Isles, off the coast of Kalimdor, where they discovered that the island's dense jungles harbored many mysteries and more than a few unpleasant surprises.[3]

Recently, the goblins of Kezan have found a new enemy in the Alliance – unexpected and unprofitable encounters with this faction have driven certain trade princes from their comfortable neutrality. Reforging old pacts with their one-time allies, the goblins have been welcomed into the Horde with open arms.[4]

Trade princes are the five (more or less) rulers of the goblin world, each of whom run their own private army (or armies), hold lands around Azeroth, and collectively control the Trade Coalition.[10]

While goblins answer to no king or other such titular head, a collection of trade princes rules their merchant empire, which is called the Trade Coalition. Officially, five trade princes exist, though there may be one or two more lurking about in the shadows. The goblins certainly don't elect their trade princes, nor are the positions hereditary; the trade princes killed, blackmailed and schemed their way to the top. Together, these five goblins make the mercantile machine run, organizing the extensive and complex Trade Fleets.[11]

One trade prince thought the Horde was destined to win the war, and aligned with them. When the Horde lost, he left and went back to Kezan in dismay. From that point on, the goblins decided to remain completely neutral, if only to better exploit both sides.[12]

A titan-made chalice held by the goblin trade princes in Undermine is one of the items Alexstrasza believes could have rejuvenated the Sunwell.[13]

Their hands are the moguls. Barons serve as magistrates for their land and holdings. Slavers run the slavery trade. Captains can run a single ship, and some run entire Trade Fleets. Admirals run more than one fleet. Traders and merchants work for the moguls and barons.

At the bottom are civilians and workers, and finally slaves.[10]

Due to his high standing, Krix Wiklish could have been a trade prince.