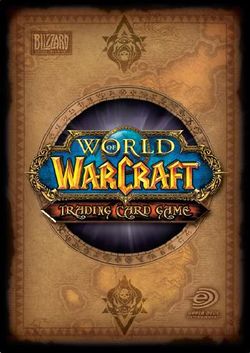 The TCG was first released in October of 2006 by Upper Deck Entertainment. In March 2010 they lost the license from Blizzard Entertainment, and on March 24th, 2010 Cryptozoic Entertainment announced the acquisition of the game's license.

The TCG was produced for nearly seven years, when it was announced on August 23, 2013 that Set 21, Timewalkers: Reign of Fire would be the last set made.[1] The announcement came a week after closed beta started for the digital card game Hearthstone, a spiritual successor to the TCG which features many of the same characters, abilities and artwork.

Unlike most TCGs, the game has a larger focus on multiplayer, having both raids and battlegrounds.

Each player uses a hero card and a deck consisting of allies and other supporting cards. In booster and starter packs, gamers can find cards representing weapons, abilities, armor, items and quests. Some booster packs also contain legendary rares, or loot cards (i.e. special versions of normal cards) which contain a scratch-off code. This code can then be redeemed in the online game for a virtual prize. The prizes include special tabards, gimmick items, noncombat pets, and mounts.

During play, players start with a single hero, and then play additional cards to augment the hero's powers or add additional members to his or her party. As in games such as Magic: The Gathering, the goal is to reduce the remaining health of the opponent to zero. Unlike Magic, combat attacks are always directed at individual heroes or allies, rather than simply declaring an attack with a number of creatures. Furthermore, damage done to characters accumulates between turns, making combat more expensive for both the attacker and defender.

In addition to standard 2-player game play, the game also features "Raid Decks", representing struggles involving large numbers of players against epic foes. These need 1 "Raid Master" and 3 to 5 other players. The Raid Master controls all monsters and foes, while the other players control the characters participating in the raid. Players who are victorious may be able to win certain "loot" cards from the treasure pack that came with the deck. A treasure pack contains holofoils, and sometimes contains a random insertion of a "loot" card. Upper Deck Entertainment also made treasure packs available from their UDE points store, although the cards in these packs are not holofoil.

As of 2010, five Raid Decks have been released, each based on a location in the WoW MMORPG: Onyxia's Lair, Molten Core, Magtheridon's Lair, The Black Temple, and Naxxramas. The next raid to be released was Assault on Icecrown Citadel.

The following types of cards are featured in the game: 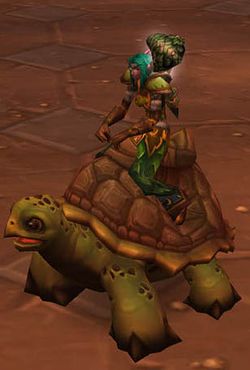 The TCG offered "legendary" loot cards. These cards are special versions of the normal card, however, they have a scratch off bar which contains a long hexadecimal code. These cards are entered on the Blizzard web site which converts them to a similar code that is specific to the realm of your choice. You then use the code with Landro Longshot, a vendor in Booty Bay, to obtain the item. The codes are single-use, so you get one item on one character on one server for each loot card code you get. You do not get the item on all your characters, unlike the collector's edition pets. If you are having trouble with your loot cards, check out the loot card walk-through.

These loot cards are divided into three categories:

One of the original "pulls" of the WoW TCG was that each booster pack had a guaranteed UDE points card, which featured 100 UDE points on it. These cards could be turned in at the Upper Deck website, and be used to buy various items. After a while, the points cards became material cards, while still featuring points. The UDE points program did not transfer with the TCG when it moved to Cryptozoic, so material cards released after Wrathgate no longer have UDE points on them.

The current version of rules is 5.0.

While the artwork of some cards was overseen and sometimes edited with Blizzard's Creative Development department input,[2][3] with Chris Metzen suggesting some of the cards[4] and being particularly vigilant about the way named heroes were handled,[5] Blizzard declared that the Trading Card Game is not considered canon, and neither are its cards descriptions. Moreover, contrary to Hearthstone, "there is no tie-in story for the TCG and it is not a mini-game within World of Warcraft".[6][7][8]