Trag Highmountain is a tauren from the Highmountain tribe — which is known to have fierce warriors in the Horde. Trag was one of the first tauren to explore Lordaeron, where he befriended a human noble.

Trag Highmountain chanced upon a small human barony in the Alterac Mountains. The barony was controlled by the kind and gentle Baron Valimar Mordis. The two soon became friends and Trag decided to stay. When the Scourge later came and slaughtered his friend and everybody else, Trag hid away...but not before killing some ghouls.

Sometime later, a now undead Baron Valimar, running from the Scourge, returned to his ruined fortress as a Forsaken and encountered Trag there, and together they worked to destroy the Scourge. They were after a particular Scourge leader, Ichor, who wielded the Orb of Ner'zhul — which could revive ancient behemoths or even frost wyrms. The Baron wished to use it to raise a large army of undead but kept some of his plans secret from Highmountain.

A young "human" woman, Anveena Teague, arrived in the vicinity of the castle. She was "rescued" by Trag and the Baron. The Baron's intended to sacrifice the innocent Anveena – who held powerful magic within her — in order to utilize the Orb's power; this did not sit well with Trag. He soon awakened himself to the fact that the Baron he once knew was dead and gone, and that what stood in the Baron's place was no better than the Scourge. He tried to rescue Anveena but was defeated by Valimar.

Trag awoke and confronted the Baron again as he raised his undead monstrosities. Trag closed his huge fist around the Orb in the Baron's hand, shattering it, and causing the frost wyrm that the Baron had summoned to come crashing down onto the castle, killing them both.

Though killed by the fallen remains of the frost wyrm, Trag was raised in undeath by the Orb of Ner'Zhul's final magical act. Haunted by visions of Northrend and hearing the call of the Lich King, Trag sought out the Highmountain tribe shaman, Sulamm, in hopes of reversing the curse and returning to life. Sulamm told him that it is not possible and claimed that he can remain with the Highmountains.

At the Henge of the Earth Mother, Sulamm placed Trag in a trance state, promising to end his suffering; in truth, Sulamm had informed the tribe of Trag's fate, and led by Ornamm, his kinsmen now attempted to burn him alive in a flaming pit. Within his mind, Trag began to stir. Trag felt something is wrong and awoke through what he assumed was the same power that returned him to life, he defeated his kin but didn't kill anyone, took the weapon of Ornamm, and left the shaman Sulamm in a trace state instead of killing him saying that he wouldn't kill a person that could not defend. He even ignored the Lich King's whispers of killing his tribesmen.[1]

Fleeing towards Northrend, Trag avoided his kin and tried to slip past the orcs. The corruption caused Trag to suffer from fits of violent thought, and he felt he would eventually succumb to the power of the Lich King.

However, Trag encountered Thrall, who became aware of his presence through his shamanic magic. Thrall offered to help, but Trag lost control of himself and the two battled. Even after calming down, Trag warned him to run before Trag lost control of himself again. However, Thrall outright refused to fight him, nor abandon him to fight against the voice of the Lich King alone. Thrall then told of how he had once feared becoming the animal Aedelas Blackmoore thought him to be, of falling into bloodlust to escape that fear; but the truth is, bloodlust would have only hidden his fear, leaving it to eat away at him forever. By bringing peace into his soul (possibly by facing his fear and accepting that his past is part of who he is), Thrall conquered his fear, survived, and found his redemption. If Thrall could do it, if Grom Hellscream could do it, so too could Trag if he would allow Thrall to help him. Trag denied that Thrall could do anything for him and warned him away once more. Thrall again refused, and when told that he would be struck down in accepting such a fate, he asked that Trag look him in the eyes "as you do so I know my executioner".

Trag prepared to kill Thrall, only to see in his eyes that he truly does understand Trag's fear, a calm understanding that allowed Thrall to beat his own fear, and from which Trag now draws enough strength to deny the Lich King's demands to kill him. Thrall offered him shelter and safety with the orcs, which Trag turned down; he knew even better than Arthas that his fear would have turned him into a monster, but can't fully trust himself around others just yet. He decided to continue to Northrend and ensure for himself that he will never become one of the Scourge, even if that means self-destruction. Thrall told him that a Horde fleet of ships on the nearby shores of Durotar would be sailing north soon, and offered a small Frostwolf clan mark should he need to contact orcs. Trag turned down the mark but thanked Thrall for the offer; he was kind to someone who might have killed him. Thrall admitted with a smile that he wouldn't have just stood there if Trag had tried, but had judged the tauren correctly. Thrall said he would ask the spirits to watch over Trag and to his surprise bid him farewell by name, even though Trag had not mentioned it.

Trag stowed away on one of the ships and reached Northrend. Even though he was almost sure that he would fail, more so that he would die, Trag was determined to meet his fate...without fear.[2]

Trag came to Northrend with only one purpose - to reach Icecrown and the Lich King. In the Borean Tundra Trag met the traveling taunka; Akiak when he was about to fall to a hole made by a Jormungar. Akiak took him to his village; Taunka'le. Trag was surprised by this action and by the taunka's hospitality, but he did not stay long. Having heard of the magic bones of the great dragons in the Dragonblight he, joined by Akiak whose mate, Buniq, should be there, set out to find a piece for himself. They found the corpse of Buniq and a bone fragment belonging to the great proto-dragon Galakrond. Trag recognized its potential against the Lich King and brought it back to Taunka'le. When nearing the village, Trag and Akiak discovered that it was under attack by the Anub'ar. Trag successfully battled of the nerubian invasion, by jumping down the sinkhole from whence they had come and slaughtered their leader. Wandering though the nerubian-made caverns Trag finally reached daylight: at the foot of Icecrown Citadel.[3]

Trag made his way into Icecrown Citadel and confronted the Lich King, but hesitated when he sensed that they shared some inner link. The Lich King explained that dark magic which reanimated Trag came from the Orb of Ner'zhul, and said, "part of what I am comes from what was the spirit of its creator". Trag cursed Ner'zhul's name, but the Lich King said, "Ner'zhul is no more. He is consumed. There is only Arthas now... Arthas, whom you shall serve for all eternity." When Trag resisted, Arthas used his magic to dominate him. Trag was equipped as a death knight and ordered to slay a group of taunka he had assisted earlier in his journey as well as taunka's villages. With great difficulty, Trag managed to fight the Lich King's control. Turning on his new master, Trag struck Arthas's breastplate with his axe. Though the armor magically repaired itself, the Lich King was outraged by the tauren's audacity. As Trag was preparing to hit the Lich King with Galakrond's fragment, the Lich King blasted Trag out of the citadel and sent him flying through the air. Though Trag's body was broken by the fall, the essence of the orb soon reconstructed him, and he no longer heard the Lich King's voice in his mind. Akiak and his taunka defended him against anub'ar and invited him to live with them. Trag agreed and swore to protect his new family and home.[4] 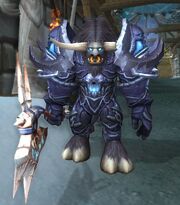 Trag Highmountain as seen at the Argent Tournament Grounds.

Trag Highmountain made his first appearance in the game with Call of the Crusade at the Crusaders' Coliseum where he was seen walking and speaking to Akiak. He appears as a tauren death knight in Tier 8 battlegear and is part of The Taunka. He claimed that when the time is right, he will join the assault of Icecrown Citadel.

Trag kept his word and joined the assault on Icecrown Citadel. However, this epic battle was fought on many fronts. While the heroes assaulted the citadel directly, Trag and a handful of death knights took the fight to Arthas on another battleground. These warriors were victorious, but rumors tell of how this fearless tauren took an arrow to the knee.[5]

Trag can now be found as a member of the Ebon Blade within Acherus: The Ebon Hold.