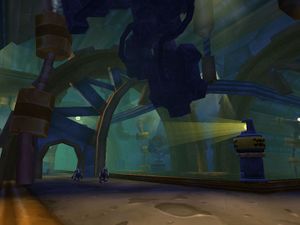 The Train Depot is located within Gnomeregan (though outside the instance), and is the first area players encounter after taking the elevator down from Dun Morogh. It is full of leper gnomes and troggs, and was presumably a transportation hub before the city's networks were destroyed.

The Train Depot leads to the core of the city (the instance) via the Clockwerk Run to the west. Off the northern-most room (known by some as the Workshop) are: the Loading Room (to the west); and the back door into the instance (to the north), which can be opened with the [Workshop Key], and which leads down into the upper level of the Engineering Labs. Namdo Bizzfizzle is also hiding up against the north side of the main platform on the lower level of this room. 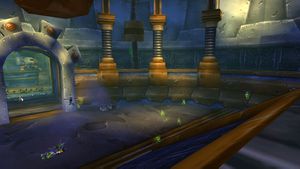 In the expansion World of Warcraft: Cataclysm, The Train Depot is where new Gnomish players start.