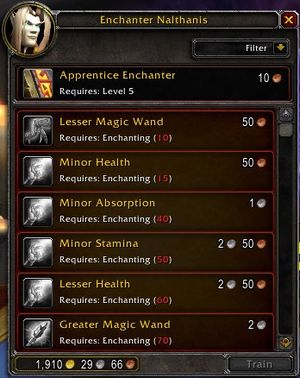 A trainer is a special type of NPC that offers certain training or services, for a price. Guards in capitals can point players to the nearest trainer of any given type.

trainer out of range

Class trainers offer characters of the appropriate class the opportunity to reset their specialization, talents or glyphs, as well as selling the Dual Talent Specialization ability.

Professions trainers give out profession skills and recipes, once the character has reached the appropriate level and proficiency.

Since the 4.x release patches all trainers will train to this level, except for the multi-profession trainers found in starting areas.

Grand Master Trainers can be found in various far-flung locations for each faction in Northrend, but most are found in the faction starting towns of (

Valgarde and Valiance Keep for the Alliance,

Vengeance Landing and Warsong Hold) for the Horde, and Dalaran for both factions.

Before Patch 2.3, Master was a title given to a trainer who could train a character to the Artisan stage of a profession. After Patch 2.3, most Master titles were removed from trainers, and all capital city trainers could train up to Artisan.

In the past, Master Trainers would be found in various far-flung locations for each faction. Some were even found inside dungeon instances!

Previous to Patch 2.3, profession trainers used to also have various levels of trainer titles from Journeyman to Expert to Artisan, such that they could only train to below the level of their title. Now in Azeroth (except Northrend), there is a main trainer and an occasional apprentice trainer (mostly in Silvermoon City and Undercity for some reason).