From Wowpedia
(Redirected from Transmogrified)
Jump to: navigation, search 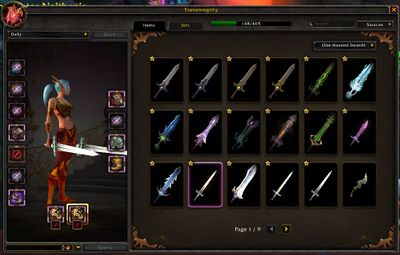 Transmogrification (commonly referred to as transmog, tmog, xmog or simply mog) provides the ability to replace the appearance of your armor and weapons with those of other items, or to hide certain pieces of armor.

When a player earns or equips an item suitable for their class, the appearance of the item is added to their Appearances collection. Valid items whose appearance the player has not yet collected are highlighted in their tooltips. All soulbound items are automatically added to the player's transmog collection, as well as all quest rewards from completed quests, even if the player did not choose that reward.

By visiting special NPCs, players can browse all available transmogs for any item currently equipped, and replace its appearance with the chosen transmog. Transmogrifying an item costs a variable sum of gold, but can be reverted for free. Hiding armor is also free.

Transmogrification has a number of restrictions, and not all items or pairings can be transmogged. Most importantly, the character must be able to equip both items, armor must be of the same armor type, and weapons must use the same attack style.[1][2]

Right-click on the NPC. You will be presented with the transmogrification interface, which shows your current equipment, similar to the standard character equipment window. Selecting any item will display in the right hand pane all alternate appearances collected for that item. Appearances selected will be immediately previewed in the character pane.

Once you are happy with the appearance, press 'Apply' to apply all selected transmogs (and/or reversions), for the stated price in gold.

The cost to transmogrify any item is its vendor value, with a minimum of 1

at level 90. Lower-level characters have an adjusted minimum cost.

If you don't want to perform the transmogrification, simply close the window or walk away.

Subject to certain restrictions, gear from nearly any source can be used to transmogrify, such as: world drops, quest rewards, badge vendors, and crafting.

Collecting appearances is one reason to run old content such as raids. World events often reward special items intended for transmog, as do various game elements such as professions. The auction house is also a good source, though desirable items may command high prices.

For the dungeon sets 1 and 2 from Vanilla, which are no longer obtainable, you can buy replicas from vendors at the Darkmoon Faire. These items were specifically made available for transmogrification.

Since we announced the transmogrification feature coming to World of Warcraft with patch 4.3, we have monitored thousands of follow-up comments, questions and suggestions from players all over the world.

What follows is our current list of rules for transmogrification. This is a set of rules that we expect to change over time, and is not intended to be 100% comprehensive, but we hope that it can be referenced to answer most questions that players currently have about what they can and cannot expect to be able to do with transmogrification.

In general when transmogrifying weapons, target and source have to be of the same type. However, this restriction has been relaxed in certain ways since the introduction of Transmogrification. As stated at the beginning of the article, the player in question must be able to use the source and the target; this also includes being the appropriate level for using an item. For example, a druid can equip a polearm or a staff, and transmog one into the other. However a mage cannot transmog their staff into a polearm because they cannot equip polearms.

Weapon types that can be transmogrified to each other:

This leaves daggers, fist weapons, wands, shields and off-hand items as incompatible to other weapon types.

There are currently some items that are unlocked by default in the transmogrification that can be used to hide a specific piece. However, some of the items have yet to become available but do exist in the game.

A transmogrification set or transmog set, more broadly categorized as a vanity set, is a group of items of the same armor type designed with the same visual style and spanning at least two armor slots. A character wearing the set or a transmogrification of the set will tend to have a consistent appearance, so they are often collected purely for this purpose. They should not be confused with gameplay-affecting armor sets, which grant set bonuses when worn together.

"Transmog set" may also refer to any group of items to which a player has (or had, or intends to have) his or her gear transmogrified. This may range from a true vanity set designed by Blizzard artists, a mix of items custom selected to achieve an unusual in- or out-of-universe look, or a simple grab-bag of preferred items with little regard given to matching or composition.