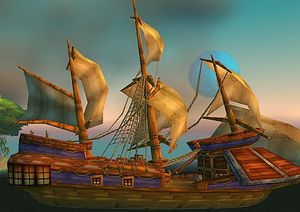 Transport ships are boats that come in many designs from different races but their purpose remains the same. They are used to carry troops and equipment across bodies of water to deliver them to battles in remote locations.

Transports were a vital part of the Alliance war effort, for it was these sturdy vessels which allowed troops to traverse various waterways to engage in battle. Designed to carry and deliver several ground units directly onto the shore, transports were slow and unarmed, and thus relied upon protection from destroyers and battleships.[1]

Transports were huge, skeletal ships charged with ferrying Horde troops across large bodies of water. Being slow and bulky, transports relied upon magical armor to repel enemy fire. Although the Horde was known to defend their transports with destroyers and juggernaughts, some reckless crews sailed straight into a naval engagement to deliver their troops to land.[2]

Generic transport ships could be bought at any Goblin Shipyard. During the The Frozen Throne campaigns several shipyards also sold boats according to the buyer's faction, including transports.

The transports of the Second War were closer to landing crafts than real transport ships and such boats have not been seen in Azeroth yet, but the Iron Horde has been known to use landing barges on Draenor. Generic ships used by both humans and goblins of the Steamwheedle Cartel are nowadays used as active passenger ships. The night elves also have a sizable transport fleet.

The commanders of Lunarfall and Frostwall can also build generic transport ships at their garrison shipyard.