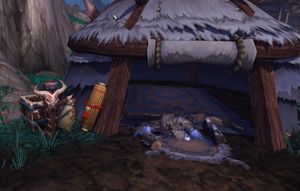 Trapped in a Strange Land is a wood-panel scroll leaning against the entrance post of a yaungol yurt, found at [84.1, 72.9]

in the northeast portion of Hatred's Vice in the Townlong Steppes.

[The Song of the Yaungol].

The origins of the yaungol are unclear. The earliest historical record of the race dates back to the time of the mogu emperor Qiang the Merciless. His scholars describe nomadic tribes of "intelligent bovine hunters" who roamed "expansive hunting grounds beyond the western reaches of the empire."

It is thought that several tribes of these hunters were trapped in pandaria[sic] when the continent was separated from the mainland during the Sundering.

Imprisoned in the dangerous Townlong Steppes, the hardy yaungol were forced to adapt, weaponizing local supplies of oil and developing their own aggressive culture.

Few races can stand toe-to-toe against the mantid in open ground. For this reason alone, the yaungol survivors are to be feared and respected.