Trebuchets are siege weapons. During the Scourge invasion of Quel'Thalas, Arthas Menethil used trebuchets in the high elven land.[1] The pandaren of the Shado-Pan also have small trebuchets.[2] 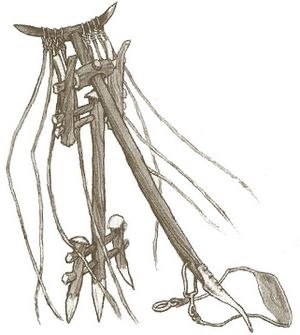 Trebuchets use a lever arm to hurl a projectile in an arcing ballistic trajectory toward their target. Yet that simple mechanism is employed in many different manners on the battlefield.[3]

Whirlwind trebuchets are built around a central support pole with the axle sitting atop it on a pivot. This allows the whirlwind trebuchet to be turned in a wide arc to be quickly aimed at new targets, but also restricts it to lighter projectiles. The crew of a whirlwind trebuchet is made up of a commander and six "runners" who load the weapon and then pull the ropes on the far end of the lever arm to throw the projectile.[4]

The tiger trebuchet was given its nickname by tauren who watched Alliance projectiles tear through their fortifications in the Barrens "like unstoppable beasts." The lever arm of a tiger trebuchet is mounted to an axle atop a large triangular frame. After being loaded by a dedicated group of four crewmen, more than twenty-five "runners" pull the trebuchet's cords to fire the weapon. The legs of a tiger trebuchet are commonly set into the earth to give it additional stability, allowing it to fire heavier projectiles that can do tremendous damage.[5]

The biggest siege weapon seen on the battlefield is the siege trebuchet, an enormous machine standing more than forty feet tall that can take even experienced crews several hours to assemble. A large, steel-bound box filled with several tons of earth and stones counterweights the massive projectiles thrown by the siege trebuchet, and single shots have been known to punch straight through thick city walls.[5]