Trenton Lighthammer is a high elf blacksmith located at Sandsorrow Watch in the contested territory of Tanaris. He is a member of the blacksmithing group called the Mithril Order and is searching for the legendary sword known as

[Sul'thraze the Lasher], helped by a sand troll called Mazoga.

He is also the master of the tower and has a jagged scar across his face. Some time after the Cataclysm, Trenton and his three goblin friends were visited by Aramar Thorne, Makasa Flintwill, Taryndrella, Murky, and Hackle. He allowed them to sleep here. Since Aram knew a bit about blacksmithing, the two forged a new harpoon for Makasa. Trenton also gifted Aram a new iron chain for his compass, so he could replace the old, broken one. He also added a few, new iron spurs to Hackle's war club and gave a small pouch of apples to Drella.[1] 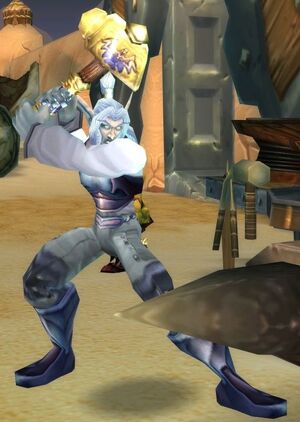 Trenton's model prior to the Cataclysm.

He used to be involved in the following quests:

Players who were training in armorsmithing would come to him for additional recipes.

Gossip
Sul'thraze... the first time I heard the word uttered I was around your age. It meant nothing to me then, as it means nothing to you now. It was not until a warband of trolls coming from Zul'Farrak laid waste to the land that I understood... and feared.

Many will tell you that the Splitblade of Suffering does not exist. That it's a myth; a rumor started to scare children. But believe me, <race>, it exists.

<Trenton loses focus as he runs his hand across the jagged scar on his face.>

Split in two to form the one. The twin blades are bound to Zul'Farrak.

Sul'thraze will be reborn when the twins are found.

Hear ye, denizens of Tanaris! Let it be known that <name> is an exalted member of the Mithril Order. A blacksmith of honor, dedication, and infinite patience. Three cheers for <name>!