Trial of the King

Not to be confused with Trials of the High King.

The Trial of the King is the first encounter in Mogu'shan Palace.

Ming the Cunning, Kuai the Brute, and Haiyan the Unstoppable have journeyed to the palace with their clans, vying to prove their worth to their king. Yet these mogu factions are plagued with bitter rivalries. Violence threatens to flood the palatial grounds unless the bickering clans can find a way to test their strength without coming to blows with one another. 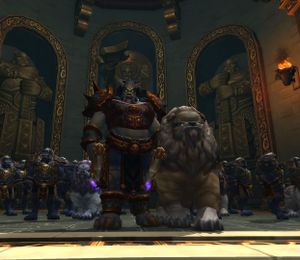 Kuai the Brute and Mu'Shiba

Clan Gurthan favors the use of fist weapons and prizes their Quilen companions. 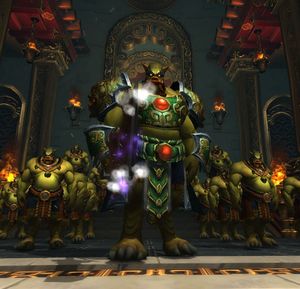 The Harthak are masters of wind and lightning based magic. 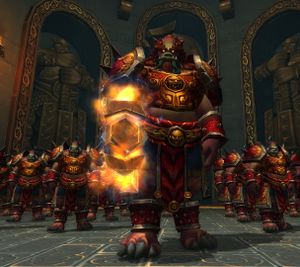 The Korgesh are strong warriors who favor large weapons and fire magic.

Kuai the Brute and Mu'Shbia: Ignore Mu'Shbia throughout and focus on Kuai. It will Ravage a random player and heal that player. Dodge the Shockwave, it doesn't hurt you, but will toss you up in the air.

Haiyan the Unstoppable: Be aware of the person being Conflagrated and Meteor.

Ming the Cunning: Dodge his Whirling Dervish and run away when he dodge Hurricane.

Aggro
Clan Harthak will show all why they are the truest of Mogu!

Killing a player
This is the might of Harthak!

Defeated
Our clan is the true clan! No interloper can change that!

Aggro
Clan Gurthan will show our King and the rest of you power hungry imposters why we are the rightful ones at his side!

Killing a player
The glory of Gurthan!

Defeated
We will never surrender our right to rule the destiny of our people!

Aggro
Clan Kargesh will demonstrate why only the strong deserve to stand at our King's side!

Killing a player
For Kargesh!

Defeated
Impossible! Our might is the greatest in all the empire!

All three defeated
Kuai the Brute yells: Who allowed these outsiders in our halls!? Only Clan Harthak or Clan Kargesh would stoop to such treachery!
Ming the Cunning yells: Only the dogs of Clan Gurthan would point fingers at others for their own failures! Your clan is the most desperate! It must have been you!
Haiyan the Unstoppable yells: Clan Gurthan is right! Only the honorless Clan Harthak could bring in a lesser race to do their bidding! You must be traitors!
Kuai the Brute yells: A well-scripted exchange, but we are not fooled! Your clans are clearly in league with one another! For the glory of our King, our empire, we will put you all down!
All three clans charge at each other and begin fighting in an all-out brawl.

Ming the Cunning: Silence, you motherless mu'shan herders! I'd blame your clan, but your skulls are too thick to figure out a child's puzzle box, let alone how to usurp power.
Haiyan the Unstoppable: Clan Kargesh will not suffer these insults! We will have your heads to offer to the King as proof of our might soon enough!