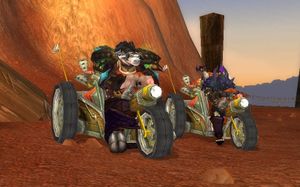 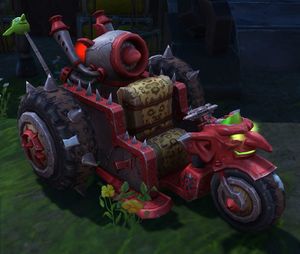 The trike is a goblin three-wheeled mechanical vehicle similar to the choppers. Like the gnomish mechanostriders, the trike is mechanical by nature. Trikes can be purchased from Kall Worthaton <Trike Dealer> in the Goblin Slums of Orgrimmar.

With the Bilgewater goblins now in the trenches with the bigger brutes of the Horde, a significant number of trampling deaths have been reported. Normally unconcerned with such matters, Trade Prince Gallywix was alarmed to learn that Garrosh’s Forsaken accountants refused to pay soldier death benefits if the soldiers never got to the actual battle, and accidental stomps caused by tauren maneuvers made it extremely difficult to calculate how many goblins had made it to the battlefield before they were rendered flat. Gallywix offered a substantial cash reward for an invention that could both lift goblins out of hoof traffic and speed them along at comparable velocities so that goblin soldiers could die in “a calculate-able and reimbursable fashion.”

Hundreds of submissions were made. Most exploded upon delivery. In the end, the clear (and relatively undamaged) winner was the sturdy transport trike created by the remarkably aged Jibidiah “No Fingers” Gragglefutz. Gragglefutz had been a street-side grenade salesman for decades, and years of product-related mishaps had borne fruit in this speedy, durable, and mostly unexplodable vehicle. Jibidiah gained some renown for his creation, and he now claims that Gallywix has him hard at work on a speedier “turbo” version of the trike. Jibidiah’s one complaint is that the substantial cash reward for designing the trike has been stuck in a particularly insidious mess of red tape and mail delivery issues. The trade prince apologizes for this and promises to put his top goblins on it immediately.[1]

However, goblin trikes existed on Kezan, before the goblins joined the Horde.

The normal mount is learned from

[Goblin Trike Key] while the epic is learned from