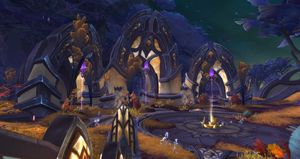 Triumvirate's End is an arena[1] in the southernmost part of Mac'Aree. It is the location of the past battle between the followers of Velen and Kil'jaeden. The battle turned in favor of Kil'jaeden when his servant Khazaduum shattered the Argunite Matrix protecting and powering the area.[2] Velen and his people were finally able to leave Argus for good aboard the Genedar, but only at the price of the sacrifice of the naaru L'ura and the eredar Hatuun and his men.[3]

Currently, the area is teeming with ghosts from that fateful day. After the arrival of the Vindicaar and the activation of its defenses, Triumvirate's End becomes the location of a Lightforged beacon. The Army of the Light is eventually able to reform the Argunite Matrix, securing the area for their own use.

The Echo of Khazaduum is encountered here.