The troggs are a race of brutish, cave-dwelling humanoids, originally descendants of the first type of titan-forged manufactured by the Forge of Wills. Known for their low intelligence, they often come into conflict with their distant dwarven relatives.

Following their war with the Old Gods, the titan-forged keepers set to work creating a new generation of titan-forged by using the Forge of Wills. However, their initial designs proved too complex, and the result was a race of stone-skinned brutes known thereafter as "troggs". Distressed by the savage creatures, the keepers refined their design, resulting in the earthen race. The keepers could not bring themselves to destroy their already-existing defective creations, and instead the giantess Ironaya created the vault of Uldaman to serve as a stasis chamber for the troggs. However, some troggs later managed to escape the vault and began wandering the world.[1] One group somehow managed to make their way into Deepholm via Uldum more than 15,000 years ago.[1][2] These troggs were not afflicted by the Curse of Flesh, unlike their cousins on Azeroth, and are therefore known as stone troggs, the "true form" of troggs.[3]

During the reign of the mogu empire, Emperor Tian encountered troggs. The emperor, who needed messengers and deliverymen, warped the troggs using flesh-shaping, enhancing their strength, smell and sense of direction, creating the first grummles.[4] 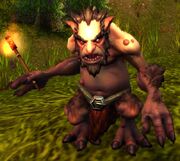 Buried deep within the earth, the troggs slept undisturbed for thousands of years until the dwarves excavated titan strongholds, such as Uldaman. Once disturbed, the troggs poured out of the ground, eager to take out their aggression on their distant dwarven cousins.[5][6] The troggs gleefully slaughtered the dwarven explorers, forcing the survivors to flee back to Ironforge. The dwarves were relieved to find that the troggs didn't pursue them, but in truth, the troggs were hunting them from underground by carving tunnels through the earth. As they neared their prey in Ironforge, the artificial noises produced by the great factories in the gnomish capital of Gnomeregan caught the troggs' attention.[6]

The troggs burrowed into the lowest levels of Gnomeregan, encountering no resistance from the physically smaller and weaker gnomes. High Tinker Gelbin Mekkatorque organized defenses to hold the invaders at bay, but the troggs repeatedly burrowed through the earth to bypass the defenses.[6] The troggs continued besieging Gnomeregan throughout the Third War. Despite their ingenuity, the gnomes were heavily outnumbered and couldn't hold back the invaders. The troggs eventually dug into Gnomeregan's engineering quarters, cutting the gnomes off from their best inventions and placing dangerous and unstable materials in the hands of the simpleminded creatures. The traitorous Sicco Thermaplugg convinced Mekkatorque to bathe the overrun sections of the city in lethal radiation to kill off the troggs.[7] In truth, however, the radiation was meant to anger the troggs and kill the gnomes,[8] and in a few days the radiation wiped out nearly eighty percent of the gnomish population, forcing the survivors to flee to Ironforge.[7]

During the Cataclysm, an earthquake destroyed the home of the Rockjaw tribe of troggs in Coldridge Valley. Believing the dwarves to be responsible for the earthquake,[9] the Rockjaws came to the surface in numbers never seen before and lashed out in anger at the nearby dwarves of Anvilmar.[10] The hordes of troggs also forced the Frostmane tribe of ice trolls to move east, causing the trolls to come into conflict with Kharanos.[11]

A large amount of troggs in Loch Modan were also enslaved by Tunnel Rat kobolds loyal to the Axis of Awful. The kobold geomancers managed to create some kind of parlor trick to control the brutes, as the troggs are ultimately "creatures of the earth".[12]

A trogg in the TCG.

Troggs are powerfully built, with muscular arms hanging almost to the ground. They have some vague similarities to dwarves in their shaggy beards, stout forms, and thick bands of muscle that appear to have been carved from granite. However, that is where the similarities end, for they also tend to have a sloped, apelike posture as well as the heavy browridges and pronounced canines of a predator. Troggs have jagged, bony growths on their shoulders and elbows, a testament to their rocky heritage.[13] They also have heavy minerals in their physiology.[14] Troggs are known for their foul smell, which resembles a mixture of mold, mange, and sour monkey.[13][15]

Troggs are much larger and physically stronger than gnomes[6] and can be easily twice the size of a gnome. One trogg is usually a match for four or five gnomes, assuming they are armed and experienced in subterranean warfare.[13]

Force of will and a strong sense of cunning are the only driving factors in the psyche of the trogg. Troggs are known to engage in cannibalism; they consume stone and anything else they can acquire — including other troggs.[16] Troggs value strength over anything else,[9] and so the biggest, strongest, and most vicious trogg often becomes chieftain through displays of power.[17]

Though they are cunning in battle, troggs usually do not possess high intelligence. Instead, they depend on their ferocity and tough hides to see them through. Most are vicious fighters, though some slightly more intelligent troggs have become spell casters as well.[5]

Most troggs loathe traveling aboveground and instead prefer using their jagged claws to dig tunnels through the earth.[6] Some troggs are known to hoard titan artifacts, and some luminaries in Ironforge's prestigious Explorers' League have pointed to this behavior as a reflection of the dwarves' own reverence for such wondrous devices.[18] Exquisite specimens of trogg engineering are nearly indistinguishable from simple rocks,[19] and their most advanced craftsmanship apparently takes the form of using rocks as tools.[20] However, troggs are also known to have developed axes, arrows, and even rudimentary spoons.[21]

According to High Examiner Tae'thelan Bloodwatcher, one must not be so hasty as to overlook the troggs. While they may be simple, they know things about the deep, hidden places of the world.[20] 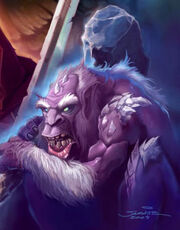 A trogg on the cover of Lands of Conflict.

The creature is a grotesque parody of a dwarf, with oversized head, bent spine, arms that drag along the ground, and a mouth filled with ragged, oversized teeth. It wears rough, smelly hides and carries a crude club covered with spatters of blood. The creature is barrel-chested and powerfully-built, with a thick forehead and jutting lower jaw. Malicious cunning is apparent in its deep-set eyes.[22][23]

Troggs have a distinctly neanderthal look — low, sloping forehead; thick skin covered with bristly black hairs; and the long arms and bent spines of an ape.[23] Troggs are a barbaric, almost "caveman-like" race with very low intelligence but a great capacity for violence of all kinds. They were the titans' first attempt to create life from living stone, but the experiment was a failure. Dwarven scholars postulate that the experiment went wrong due to the interference of the Old Gods.[22] (The successful second attempt gave rise to the dwarven race.) When the titans saw how brutal and misshapen the troggs were, they buried them in vaults all over the land that would become Khaz Modan. The main vault of troggs was the old Titan city of Uldaman in Khaz Modan. There they stayed for countless ages, until the dwarves began excavating Uldaman. The dwarves dug too deep and released the troggs from their ages-long slumber. Now the troggs have begun to spill out of every deep hole to spread terror across the dwarven kingdom. The troggs have an unnatural hatred of their “pretty” cousins the dwarves. They may be dumb, but they are hell-bent on taking out their aggressions on the dwarves.[22]

They are dull-witted and savage, but possess a ferocious cunning that makes them dangerous despite their lack of civilization. Troggs are related to dwarves, but if anything, the two races are distant cousins. Some legends say that both dwarves and troggs descended from the original earthen race left behind by the titans after the world was shaped in ages past. While the dwarves evolved into the stocky creatures known today, the troggs retained a stronger connection to the stone from which they were made. For reasons not yet fully understood, the troggs' evolutionary path led them to their present state — crude, stupid creatures only barely above the level of beasts. Troggs look and act nothing like their distant cousins, however. They dwell in rocky areas, but don't mind living above ground if they must. They eat just about anything, supplementing their diet of plants and raw meat with dirt and rocks they crush between powerful, flat teeth. The resulting gravel helps with digestion and is partially absorbed into their bodies, increasing their toughness. Troggs stand about 5 feet tall in their normal hunched-over state, but if they draw themselves fully erect, they exceed 6 feet in height. They weigh around 300 pounds. Troggs do not speak, but can make themselves understood with guttural growls and grunts.[24]

Troggs are brutal and cunning in battle (indeed, that is their approach to most things in life). Their flesh is living stone, offering them a useful natural armor.[22] Troggs lack subtlety in combat (or in anything else, or that matter). They typically rush toward the closest opponent and bash it over the head until it dies, then move on to the next victim. A trogg usually begins combat by raging.[25]

Troggs are usually barbarians. Warriors and rogues are less common, with healers and elemental shaman being the only known spellcasting classes (though even they are exceedingly rare). Arcane casters are wholly unknown among the troggs, as are tinkers. Some scholars argue that with proper education a trogg could learn such skills, but so far no one has bothered to try teaching them. While hunter might seem to be a logical class for a trogg, that class is rare among them — apparently, these creatures lack the patience required for animal handling. Although an adventuring trogg is not an impossibility, such a creature would have many hurdles to overcome — the primary ones being stupidity and language. Troggs are almost universally brutish, primitive menaces in civilized lands. They are ugly, smelly, barbaric savages that most would sooner kill than look upon. A trogg that could get past these social stigmas would be an exceptional individual indeed.[25]

Troggs worship the massive reptiles known as salamanders. Troggs will attempt to capture and train young salamanders as mounts. If these primitive humanoids slay or encounter a slain salamander, they will feast on its remains and make crude armor and weapons from its claws, teeth, and hide.[26]

Troggs do not normally speak, although they can use grunts and bellows to get their messages across. Troggs with exceptional intelligence sometimes learn to speak Low Common; truly gifted individuals might learn Common or Dwarven.[25] Some troggs use Low Common or Dwarven as their primary languages.[22]

Troggs were first introduced to Hearthstone with the Goblins vs Gnomes expansion. Many trogg cards gain in power whenever an enemy spell is cast; this may be meant to be a representation of their low intelligence and inability to learn magic, and that they, therefore, become angered when spells are cast near them. Alternatively, this may depict the trogg absorbing or "eating" the spell, as the triggered effects of both the Burly Rockjaw Trogg and Stonesplinter Trogg cards are labeled as "Metabolized Magic".

In the League of Explorers adventure, a giant trogg called Chieftain Scarvash serves as the first boss of the adventure's second wing, Uldaman.