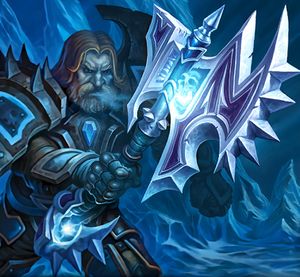 This item drops from the Lich King in the normal 10-man version of Icecrown Citadel.

This axe was probably once the property of Muradin Bronzebeard, who was once Arthas Menethil's instructor. After traveling to Northrend together, Arthas obtained the sword Frostmourne, nearly killing Muradin in the process. Muradin, who lost his memory after being knocked unconscious by the power of Frostmourne, would later be saved and become friends with the Frostborn dwarves, eventually becoming their king under the name Yorg Stormheart. It is unclear when exactly Muradin would have lost his axe, or when the Lich King obtained it. It is also unknown when Muradin would have engaged troggs, as Uldaman was unsealed after he was lost, and there are none living in Northrend. It is possible that he killed every trogg in Northrend before the axe was lost.