This article is about the playable race. For the jungle troll lore, see Jungle troll. For the in-game faction, see Darkspear Trolls.

The trolls of the Darkspear tribe are one of the playable Horde races in World of Warcraft. Trolls are an ancient and widespread people, with most living savage, crude lifestyles and attacking other races on sight. The Darkspears originally hailed from the jungles of Stranglethorn, but after being pushed out by warring tribes, they found an unlikely friendship with the orcs and sailed with them to new lands. Prior to Cataclysm, due to a traitor having taken control of their intended home, trolls started out alongside orcs in the Valley of Trials. This changed when the Darkspears at long last reclaimed Darkspear Isle, which is now where they begin their adventures.

Alongside being where young trolls start out, Darkspear Isle serves as a capital of sorts for the tribe (albeit a small one). The troll racial mount is a raptor, and their language is Zandali. They have also learned orcish to communicate with their allies. As of the latest expansion, troll characters can select from every class except paladin and demon hunter, a versatility matched only by dwarves. 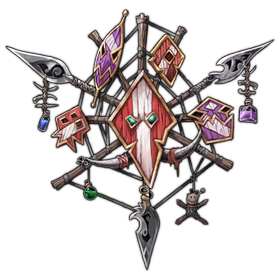 Once at home in the jungles of Stranglethorn Vale, the fierce trolls of the Darkspear tribe were pushed out by warring factions. Eventually the trolls befriended the orcish Horde, and Thrall, the orcs' young warchief, convinced the trolls to travel with him to Kalimdor. Though they cling to their shadowy heritage, the Darkspear trolls hold a place of honor in the Horde.[1]

Once at home in the jungles of Stranglethorn Vale, the fierce trolls of the Darkspear tribe were besieged on all sides by the warring factions. The orcish Horde came to their aid, convincing the Darkspear to sail across the Great Sea and settle in the untamed lands of Kalimdor. Though they cling to their shadowy heritage, the Darkspear remain vocal advocates of a united Horde, lending the strength of their arms and powerful tribal magics to the common cause.

The Darkspear tribe of Trolls, ousted from their tropical homelands, pledged their arms and shadowy magics to the Horde after having been saved by the orcs in a time of need. Now, these fierce people seek to reclaim the former glory of their tribe.[2]

The vicious trolls that populate the numerous jungle isles of the South Seas, are renowned for their cruelty and dark mysticism. Barbarous and superstitious, they carry a seething hatred for all other races. Long since exiled from their ancestral homeland in Stranglethorn Vale, the Darkspear tribe was nearly destroyed by rampaging murlocs. Rescued by the young Warchief Thrall and his orcish warriors, the Darkspear tribe swore an allegiance to the Horde. Led by the cunning Shadow Hunter, Vol'jin, the Darkspears now make their home in Durotar along with their orcish allies. As one of the only surviving Darkspears, it falls to you to reclaim the glory of your tribe.

Exiled years ago from their land in Stranglethorn Vale, the Darkspear trolls attempted to make a new home for themselves among the disparate races of the Horde. Under the leadership of the noble Warchief Thrall, Vol'jin and his savage trolls had finally found the honor and purpose they had been searching for but now, under the rule of the headstrong Garrosh Hellscream, the trolls fear that the Horde could tear itself apart. Vol'jin knows that whatever threats loom ahead, whether they be from within the Horde or from without, it is cunning trolls like you that will fight to preserve the honor of the Horde.

As tribal rivalries erupted throughout the former Gurubashi Empire, the Darkspear tribe found themselves driven from their homeland in Stranglethorn Vale. Having settled on the Darkspear islands, which are believed today to have been a part of the Broken Isles, the tribe soon found themselves entangled in a conflict with a group of murlocs. Eventually they also found new enemies in humans when a Kul Tiras-fleet landed on the island in search for some orcs who had stolen some ships. The trolls' fate seemed sealed until the orcish Warchief Thrall and his band of newly freed orcs, which were the orcs the humans were looking for, took shelter on the island after a heavy storm. The orcs managed to defeat the humans, but their victory was short-lived. Controlled by a Sea Witch, the Underworld Minions captured the Darkspears' leader Sen'jin along with Thrall and several orcs, trolls and humans. They were all brought to a complex prison made by caves below the island. Thrall managed to free himself and his companions, but was ultimately unable to save the trolls' leader. Although Sen'jin was sacrificed to the Sea Witch, he was able to reveal a vision he had in which Thrall would lead the Darkspear trolls from the island.

After returning to the island's surface, Thrall and his followers managed to fend off further attacks by the Sea Witch and her murloc minions, and set sail for Kalimdor once again. Under the new leadership of Vol'jin, the Darkspear swore allegiance to Thrall's Horde and followed him to Kalimdor. Now considered enemies by all other troll organizations except the Revantusk, Shatterspear, and the Zandalari, the Darkspear are held in contempt to this day. Yet, the Darkspear have not forgotten being driven from their ancestral homes, and this animosity is eagerly returned - especially towards the other jungle trolls. Having reached and founded the orc's new homeland, Durotar, the trolls carved out another home for themselves — this time among the Echo Isles on the eastern shores of the new orc kingdom.

However, with another approach by Kul Tiras and its navy, the Darkspear were forced to retreat inland under the onslaught of the misguided commander Daelin Proudmoore. The trolls, fighting alongside their Horde brethren led by the beastmaster Rexxar, defeated the enemy and reclaimed their new home. Shortly thereafter, a witch doctor by the name of Zalazane began using dark magic to take the minds of his fellow Darkspear. As his army of mindless followers grew, Vol'jin ordered the free trolls to evacuate, and Zalazane took control of the Echo Isles. The Darkspear have since settled on the nearby shore, naming their new village after their old leader, Sen'jin. From Sen'jin Village they, along with their allies, send forces to battle Zalazane and his enslaved army.[3]

The Darkspears’ efforts, however, failed to drive Zalazane from the Echo Isles. Following the victory against the Lich King in the frozen continent of Northrend, Vol’jin renewed his bid to defeat Zalazane and launched a brilliant assault on the isles. With the help of the tribe’s ancestral loa, the courageous Darkspears killed the maddened witch doctor and seized their embattled home. Of late, political changes within the Horde have sparked fears among the Darkspear tribe regarding its future. Vol’jin’s close ally Thrall recently named Garrosh Hellscream temporary Horde warchief. Thus far, the brash young orc has put the Darkspear leader and his tribe on edge, causing many trolls to leave the Horde capital, Orgrimmar. Although spirits are high among the Darkspears after Zalazane’s Fall, tension lingers concerning what place the trolls will have in Garrosh’s Horde.[4]

Darkspear trolls have skin colors that range from pale, ghostly blue to bruised purple to sickly green. Their skin color is usually just one of those three colors, although sometimes there are trolls with mixed skin pigments but this is not so common. Trolls' hair is usually brightly coloured, ranging from vibrant purple to deep green. Hair is usually grown long by both males and females, and often styled in a striking arrangement. Trolls have large, long ears often pierced with rings, and long, pointed noises, with both of these feature more pronounced in males. Male trolls are extremely tall, but tend to stand hunched over, hiding their true height, and are of a lithe and slender build, with long limbs and faces. They have long, protruding tusks that grow from under their lower lip, large noses and long ears not unlike those of night elves. Female trolls, while far shorter, stand up straight and erect, possess far smaller and shorter tusks, and usually have hair in a wild updo or strewn across their breasts in thick braids. 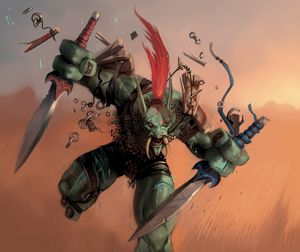 [Berserking] in the TCG.

When fighting, trolls are often driven by instinct to a state of

[Berserking], causing them to attack and cast spells more quickly. This is the iconic ability of Troll Berserkers.

Though usually exaggerated in tales, trolls' powers of

[Regeneration] are still very strong. Provided a wound doesn't kill them outright, they can usually recover from it with little to no medical attention.

Trolls are excellent hunters and have developed skills in

[Beast Slaying] over thousands of years. This has made bows and throwing weapons the iconic arms of the troll race, and has led to troll headhunters being one of the main forms of ranged support for the Horde.

Trolls' natural agility allows them to escape impediments to their mobility a bit more quickly than other races. The movements to do so resemble dancing and the trolls have termed them '

Trolls are one of the most versatile races, able to play as every class except paladins: death knights, druids, hunters, mages, monks, priests, rogues, shamans, warlocks and warriors.