From Wowpedia
(Redirected from Troll Berserker)
Jump to: navigation, search 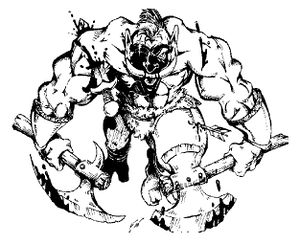 A troll berserker from the Warcraft II: Tides of Darkness manual.

Troll berserkers are members of bloodthirsty sects presents in the various troll tribes, with axe or spear-throwing hunters becoming known as berserkers through a combination of learning how to channel their rage and alchemical means. Sometimes, alchemical or magical alteration can lead those berserkers to become dire trolls.[citation needed]  Members of other "wild" races such as the vrykul can also become berserkers, but in these cases they are generally plainly enraged melee warriors instead. The Bleeding Hollow clan was also known to create dire orc berserkers in blood rituals.[1]

Heavily muscled, the troll berserkers are fueled by a cocktail of primitive and dark magic, potions concocted by the shadowy witch doctors that send the ferocious warriors into a blood-chilling frenzy.[2]

This article will only list the berserkers deployed by the trolls, in the form of normal soldiers or dire trolls identified as such. For lists about the other kinds of berserkers, read their respective pages.

Berserkers were a bloodthirsty sect of trolls dedicated to the total annihilation of their hated enemies, the elves. Suffering numerous experiments with strange chemicals and potions by the goblin alchemists, the berserkers had many strange abilities bestowed upon them that made them all but unstoppable in the heat of battle. Berserkers were hardier and stronger than most trolls, effectively transforming them into a veritable whirling cyclone of death and destruction.[4]

Berserkers were often seen frequenting the lumber mills of their people to ingest the potions given to them by the goblin alchemists. These potions enabled them to throw their axes greater distances or sharpen their sight, as well as increase the speed at which their regeneration occurred.[5]

Troll headhunters could be upgraded into berserkers, which were tougher and had the Berserk ability. Like headhunters, berserkers benefitted from troll regeneration.

Jungle troll berserkers hail from the same ranks as the headhunters. These veteran soldiers, however, learn to channel their rage to become even more fearsome in combat. Troll berserkers often lead small bands of headhunters against the enemy, setting up ambushes or performing devastating raids against their foes. In battle, these elite combatants are even more fearsome than the dreadful headhunters. Many scars mark the light-blue skin of this battle-hardened troll. A chain shirt of dark gray covers his muscular torso. The warrior carries several spears, which stick out from a specially designed quiver strapped upon his back. Expert at throwing spears, berserkers enjoy attacking their foes from afar before charging into the fray. Whenever they can, they rage and spend several rounds throwing projectiles, targeting the least armored foes and any known spellcaster first. Then they charge into melee with their last spears in hand, focusing the bulk of their attacks on the most heavily wounded opponents in order to drop as many of them in as short a time as possible. One of the troll berserkers' favorite tactics is to hide in the undergrowth and catch their enemies by surpise. When a berserker works with a band of headhunters or other berserkers, they carefullly prepare lethal ambushes.[6]

The iconic skill of troll berserkers,

[Berserking], was given to the troll player race in World of Warcraft.