From Wowpedia
(Redirected from Troll headhunter)
Jump to: navigation, search

Headhunters are spearmen specialized in tracking and hunting their opponents. Many headhunters are trolls, dexterous spearthrowers and experts at taking trophies on their fallen opponents. Through a combination of learning how to channel their rage and alchemical means, troll headhunters can become known as berserkers.

Though the Horde allied itself with the evil forest trolls during the Second War, the alliance was short lived due to the Horde’s eventual defeat. But Thrall, on one of his many journeys, befriended a tribe of shadowy trolls from the steamy jungles of Stranglethorn. These cunning warriors are trained from birth to hunt, track and trap the most dangerous beasts in the wilds and possess the uncanny ability to regenerate lost health. In times of war, however, headhunters relish turning their mighty spears on the enemies of the Horde without hesitation. Capable of hurling their deadly spears at distant enemies, troll headhunters provide invaluable cover fire for the other warriors of the Horde. Like all trolls, headhunters can regenerate lost health over time. This racial ability makes the trolls fearsome opponents and often allows them to spring back into combat even though they’ve suffered grievous wounds.[1] 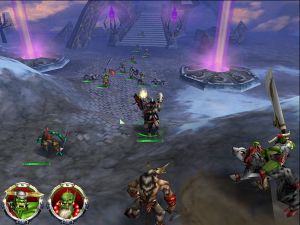 A green-skinned troll headhunter seen on the left of a Alpha Warcraft III screenshot.

This original description was written when headhunters were to be forest trolls.

The disenfranchised trolls of northern Lordaeron have once again pledged their savage services to the Orcish Horde. These cunning warriors are trained from birth to hunt, track and trap the most dangerous beasts in the wild. In times of war, however, troll headhunters turn their mighty spears upon the enemies of the Horde without hesitation. Capable of hurling their deadly spears at distant enemies, Troll Headhunters provide invaluable cover fire for the other warriors of the Horde.[2]

These trolls wear well-wrought dark brown chain shirts decorated with small black metal beads. Upon their backs is a large pack designed to carry many spears, and their points jut out over the creatures coarse, red mane. Trained from birth to track down and trap dangerous wild beasts, jungle trolls have long been renowned for their hunting and survival skills. The best among them are also cunning warriors able to fend for themselves against capable enemies. Troll headhunters excel at two things: Tracking down quarries and flinging spears at their foes. Because of these reasons, they are invaluable to the Horde. Their ability to hurl spears at distant enemies with deadly accuracy make the jungle troll headhunters among the best soldiers at providing cover fire to the other warriors of the Horde. Their superior tracking skills also make them tremendous scouting and reconnaissance experts as well as capable bounty hunters.[3]

Like most of their kind, troll headhunters excel at throwing things. They make good use of their natural talent, extensive training and hunting expertise when engaged in combat. During the first few rounds of battle, the jungle troll headhunters attack from afar - often targeting the same opponent with a volley of spears when working in groups. They continue to throw spears at their enemies until forced into melee (or until they only have one spear left).[3] 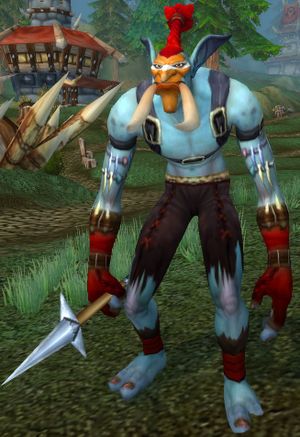 Horde Headhunter in the Battle for Mount Hyjal.