Colonel Troteman was the commanding officer of Bravo Company. He was later promoted and was known as Marshal Troteman during the Alliance's campaign in Pandaria, where he became a prominent officer in Lion's Landing.

During the First, Second and Third Wars, he acted as a commanding officer.[1]

Troteman can be found in Lakeshire Town Hall and starts the quests to reignite John J. Keeshan's will to fight and reassemble Bravo Company. After Bravo Company reassembles to combat the threat of the Dark Horde, he aids Bravo Company by providing intelligence to them and equipment such as a Siege engine.

In the Burning Steppes storyline, he aids Keeshan in his war against the Dark Horde and orchestrates some of the strategic strikes against their enemy.

It would seem that his actions in the Redridge Mountains and Burning Steppes have paid off, Troteman has been promoted to Marshal. He was present during the Landfall campaign along with the Alliance armies, and is apparently one of the leading officers in the battle zone. While chasing a Horde warband along the beach of the Krasarang Wilds, he and his scouts were ambushed by a Horde war party. King Varian Wrynn and an Alliance hero arrive in the nick of time to rescue Troteman and his men, killing their Horde belligerents. He is then ordered by King Varian to organize the construction and defense of Lion's Landing.

Troteman can be seen in the Underhold accompanying the Alliance army and battling against the Kor'kron soldiers. 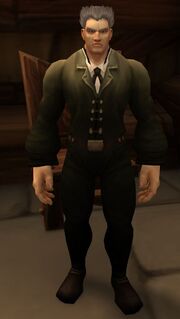 is a human quest giver first located in the Lakeshire Town Hall in the human-aligned zone of Redridge Mountains. He is part of the Hero's Call: Redridge Mountains quest chain. Note: After the quest They Drew First Blood, Troteman moves from Lakeshire to a phased flight path at [77.2, 65.9]

. Beginning with Showdown at Stonewatch, he can be found at the second phased flight path at [60.6, 36.7]

He is involved in the following quests in Lion's Landing:

Will you do whatever it takes to save your kingdom?

This all feels like a long shot. We've got a lot riding on this plan. Redridge's freedom, for one.

We aren't giving those savages an inch of ground. Not while I'm stile alive.

We've got to secure this beach stronghold. We let the Horde have a foothold here, all of Pandaria is going to look like Theramore.