Trudging through the Ashes (WC3 Undead)

Trudging through the Ashes is chapter 1 of Path of the Damned.

The Lich King's plague of undeath has spread through the Capital City and into the outskirts of Lordaeron. Shocked and disheartened by the loss of their beloved king, the forces of Lordaeron were scattered by the ravenous undead warriors. Now, Lordaeron is but a shadow of its former glory - and Prince Arthas has yet to be seen... 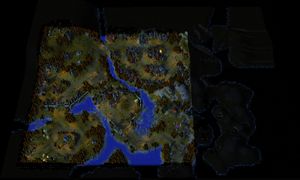 The Acolytes of the Cult of the Damned are hiding amongst the local populace disguised as simple villagers. You must rescue them and be careful not to alert the local guards to your presence.

The newly dead await you in the local cemetery. You need only approach and call out to them, and they will serve as your loyal warriors in the Lich King's name.

Arthas: What trickery is this?
The death knight notices Tichondrius standing atop a nearby hill.

Arthas: Mal'Ganis! I don't know how you survived, but I will--

Tichondrius: Calm yourself, Prince Arthas. I am Tichondrius. Like Mal'Ganis, I am a dreadlord, but I am not your enemy. In truth, I've come to congratulate you.

Tichondrius: By killing your own father and delivering this land to the Scourge, you have passed your first test. The Lich King is pleased with your... enthusiasm.

Arthas: Yes. I've damned everyone and everything I've ever loved in his name, and I still feel no remorse. No shame. No pity.

Tichondrius: The runeblade that you carry was forged by the Lich King and empowered to steal souls. Yours was the first one it claimed.

Arthas: Then I'll make do without one. What is the Lich King's will?

Tichondrius: The Cult of the Damned must be rallied once again. Many of the acolytes have been in hiding amongst the populace. Once you've rallied them, I will give you further instructions.

Acolyte: Greetings, great lord. Our master, Kel'Thuzad, told us that you would come.

Arthas: Kel'Thuzad? How could he have known that--

Acolyte: Be wary. If the townsfolk see your undead minions, they'll call the local guards to stop you.

Arthas: I cannot afford to lose any more acolytes.

Arthas: I'm in luck. These graves were dug recently.

Arthas: Arise in the name of the Lich King.

Arthas: Lordaeron lies in ashes. What good are these cultists to us now?

Tichondrius: They will aid you in your next undertaking.

Arthas: And what's that?

Tichondrius: You will go to Andorhal and recover the remains of the acolytes' former master, the necromancer, Kel'Thuzad.