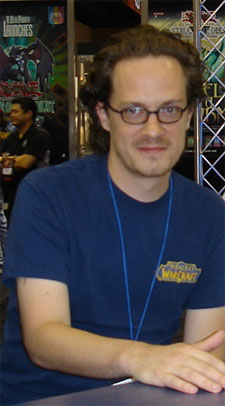 Tseric was a Blizzard employee and Community Manager for the US World of Warcraft forums.

Other Blizzard employees on Tseric

"Tseric is a genuinely good person, and has an amazing command of the English language. There have been times when I have turned to him rather than going to dictionary.com or other such sites to find definitions." —Drokthul[2]

On May 13th 2007, after a series of postings in the Shaman class forums, Tseric posted the following about his job, the challenges he deals with and his relationship with the community. The thread was deleted shortly after. A full archive of all his responses can be found on BlueTracker.[3] A couple of posts in particular were held to be particularly insightful:

When you can understand how a group of belligerent and angry posters can drive away people from this game with an uncrafted and improvisational campaign of misery and spin-doctoring, then perhaps, you can understand the decisions I make. Until you face mobs of psychology, you will not see my side.

Until you see some bright-eyed player coming onto the forums wanting to know what they should spec as this class, and see them shat on and driven away by petty and selfish people who are simply leveraging for game buffs, you will not understand.

You will not understand until you have to see it daily, for years...

Until you understand that many people will trod over you to get where they're going, or to get what they want.

Until you understand that so many people will agree, completely, 100% with a loud, vulgar and assertive individual, not because he is right, but because he is making a stand against "the Man"; to take no critical thought in what they say, but simply to hop on board.

Until you actually try to acknowledge those who do not speak on the forums, for whatever reason they have, you will not understand.

If you think an archaic business formula like "the customer is always right" works, you fail to understand customers, not a customer. It is a collective. No one person, even myself, is truly above the whole.

I simply have the unfortunate quality of being easily singled out.

Can't help it.
Posting impassionately, they say you don't care.
Posting nothing, they say you ignore.
Posting with passion, you incite trolls.
Posting fluff, you say nonsense.
Post with what facts you have, they whittle down with rationale.
There is no win.
There is only slow degradation.
Take note. It is the first and only time you'll see someone in my position make that position.
You can be me when I'm gone.

Tseric's last documented post was at 02:30:57 AM PDT on May 13th 2007. His post was in response to a Skinning a bear-like thread, in which the original poster stated the following:

Killing a Tseric should aggro every Tserics in a 40 yd radius. It makes sense, you are actually killing their best friend.

Tseric's response to this thread, which would become his final post as a CM on the World of Warcraft official forums, was as follows:

I'm sure you all think you're hilarious in your own space/mind.

Get off my internet.

Flaming a blue should aggro every blues. It makes sense[5]

On May 17th 2007 (the following Thursday), in response to a thread about a new CM job opportunity, Eyonix revealed that Tseric had indeed moved on to different things. No further information was given:

Tseric is now pursuing other opportunities and we wish him the best in his future endeavors.[6]

It is not known exactly when Tseric put in his resignation or if it was planned; however, due to the fact that his final response appeared bitter in nature and was early on a Sunday morning, it is likely that he posted it while outside the office and resigned the following Monday. Some people speculate that Tseric was fired - this rumor likely stems from the fact that the thread about his job challenges was deleted. Either way, many people agree that regardless of who made the decision, it was most likely made in the five day time span between his final post and Eyonix's announcement.

On WOW Insider, several bloggers defended Tseric as an "excellent CM",[7] while others praised him for his "resolve and strength of character" and criticized forum posters for "mercilessly taunting him". Others believed he was out of line, and could have shown more professionalism.[8]

In early March of 2008, Drysc entered a thread titled "If you could ask a CM anything..." on the General Forum and began answering a wide variety of questions with, seemingly, as high a degree of candor as he felt comfortable with.

Zalud from the realm Moon Guard asked a series of questions the fifth of which simply asked, "Tseric. Quit or fired?"[10]

Drysc, in his response to this particular question responded, "If I answer you might ask the same thing of me tomorrow."[11] Since answering the question more honestly would not, in all probability, have made Drysc likely to decide to quit, one can deduce that Tseric seems to have been fired from Blizzard. Either way, it seems clear that too much discussion over Tseric's departure is taboo.

Although some have speculated that the Jar of ashes hidden away in Hellfire Peninsula is about Tseric, it was added before Tseric's departure and the "true" meaning of the jar is unknown.