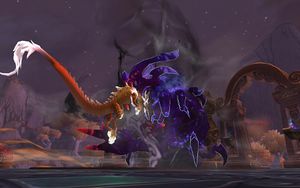 Tsulong fighting the Sha of Fear

Legends speak of a spiraling, golden serpent that can sometimes be seen high in the sky, basking in the sunlight above the clouds. The few who claim to have observed it themselves say the creature is fiercely protective of the terrace. 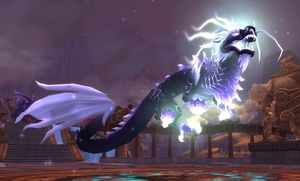 During the Day, Tsulong gains the upper hand over the Sha corruption. Players may heal and aid Tsulong during the Day, and bringing him to full health while in the Day permanently destroys the Sha's influence over him. When he reaches 100 energy, the Sha corrupts his emotions and Night descends upon the Terrace.

This fight alternates between The Night and The Day (watch his energy bar to predict the transitions). During the night you DPS Tsulong. During the day you heal him. His health flips on each transition so you are making progress toward victory in both phases.

Tanks keep Tsulong pointed away from the raid and swap off after each Shadow Breath. The tank without aggro should make sure to drop his Dread Shadow stacks in a Sunbeam. If something goes wrong and the tank swap is delayed, the current tank can run through the Sunbeam as long as the Shadow Breath just happened.

All DPS and healers should periodically run through the Sunbeam to drop stacks of Dread Shadows; simply stacking in it is inadvisable as it will shrink the longer players stay. A good time to drop stacks is right after a Nightmares spawn. The raid should also be aware of new Sunbeam spawns.

DPS should focus on Tsulong while healers heal the Dread Shadows damage. All players should avoid Nightmares (purple swirling circles with a red border) when they spawn. Players hit by it can be dispelled with a magic dispel or

In LFR difficulty, staying in the Sunbeam is possible for the entire phase, as it will not shrink quickly enough to despawn before the next one appears. Make sure to continue avoiding Nightmares while running to a new beam every time it spawns.

Healers should stack in front of Tsulong so they can get Bathed in Light. In this phase, most of the healing should be focused towards Tsulong. Dispel Terrorize off of Tsulong as quickly as possible to minimize damage to him.

Tanks will pick up the Embodied Terror whenever it spawns and move it in front of Tsulong about 20 yards away from the healers. When the Embodied Terror dies, a pack of Fright Spawns appears, which must be killed. Positioning these adds in front of Tsulong will get them hit with Sun Breath and help damage them since most of the DPS will be focused on controlling Unstable Sha. Tremor Totems are useful to avoid the random fear casts on the raid.

DPS priority is killing Unstable Sha before they can reach Tsulong. These adds can be slowed, stunned, snared, and knocked back. If no Unstable Sha are available, help the tanks with Embodied Terror and Fright Spawn.

In non-LFR difficulty, there will be two Night and two Day phases before he transitions into a third and final Night phase and enrages.

During the Night phase, new adds called The Dark of Night will periodically spawn. They will simply fixate on the current sunbeam and extinguish it. DPS (primarily AoE and DoTs) should focus on killing these adds before they can reach the sunbeam (the adds can also be knocked back).

During the Day phase, an object called The Light of Day (which can be interacted with) will periodically spawn. When clicked, the player will be buffed with greatly increased healing and mana regeneration (contrary to the tooltip, both buffs are constant over time). Ideally, these buffs should be assigned to healers with available throughput cooldowns for maximum healing on Tsulong.

Aggro
You do not belong here! The waters must be protected... I will cast you out, or slay you!

Killing a player in Night

Killing a player in Day

Victory
I thank you, strangers. I have been freed.